THE number of COVID-19 related deaths in Spain continues to rise with 131 recorded in the past week.

According to the Health Ministry, that figure is more than double the amount that had been recorded by Tuesday (63), suggesting a daily increase of 68.

It brings the total death toll in the country to 28,797 – a figure which excludes deaths in care homes and those with symptoms compatible with the virus but who did not undergo a PCR test.

The number of infections has also soared by 3,715 in the past 24 hours, while the Health Ministry has added 6,671 to the rolling total.

Figures often come in late from certain regions, producing two separate figures, one for the last 24 hours and one representing the positive results collected from previous days.

Figures released today show that in the past week 34,645 cases have been accumulated, meaning an average of 5,000 each day.

These are similar to figures seen at the height of the pandemic in March.

However the percentage of asymptomatic patients is much higher this time around, making the virus much less deadly.

But the number of hospitalised COVID-19 sufferers is also climbing, with 1,336 people being admitted in the past week, an increase of 240 since yesterday.

Meanwhile 35 patients have entered intensive care in the past 24 hours.

The Ministry of Health was eager to point out today that it has once again increased its testing capabilities, which has exceeded 50,000 PCR tests per day for the past week.

A total of more than 5.3 million PCR tests have been performed since the start of the pandemic.

The number of those who are asymptomatic has now fallen to below 50%. 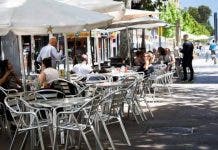