A DRUNK lorry driver rang the Guardia Civil to say that he was intoxicated and asked to be arrested.

The 56-year-old man from the Barcelona area was parked by the AP-68 in Haro in La Rioja when he made his call last week(September 2).

The Spaniard said that he was intoxicated because he wanted to be sacked by his employer in order to get early retirement and state benefits.

He added that if a Guardia patrol didn’t come to arrest him, he would continue his journey and cause an accident.

Agents arrived on the scene where the man once again pleaded to be detained.

He threatened to assault them and throw himself into the middle of the road if the arrest didn’t happen.

He was duly detained after a roadside test showed that he was five-times over the drink-drive limit.

The Guardia revealed that the driver had a record of previous road safety crimes. 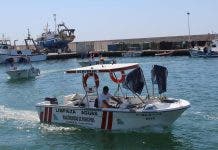