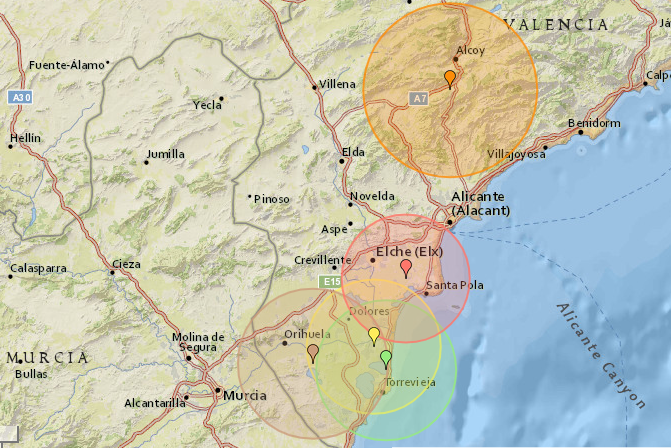 FOLLOWING two earthquakes reported in the Torrevieja area yesterday, another even bigger shock was felt in Alcoi this morning, in the hills above Benidorm.

With a magnitude of 3.3 it surpasses the previous two, that recorded levels of 2.6 and 2.4, respectively.

According to earthquake.usgs.gov, tremors were felt in areas north of Alcoi, and south of Benidorm, less than 40 miles away.

Earthquakes of such magnitude record ‘shaking’ as between ‘light’ and ‘moderate’, with the chances of structural being ‘very light’ at worst.

Including smaller tremors of just over 1 in magnitude early on Monday morning, today’s quake is the fifth in the space of two days on the Costa Blanca, without any others elsewhere in Spain.

Indeed, the nearest elsewhere in Europe was a single tremor felt near Neon Karlovasion in Greece.