THE Prime Minister of Spain Pedro Sanchez has penned a heartfelt letter to the 11-year-old victim of a vicious homophobic attack.

The young boy had to be hospitalised after a bully called him a ‘fag**t’ and repeatedly punched his face so hard he broke in his nasal septum.

The victim was attacked as he was leaving the IES Isaac Peral school in Cartagena and had to undergo surgery at the Santa Lucia hospital.

“I am writing to share these difficult days with you and to send you my love,” Sanchez typed in his letter.

“Now it is the turn of your friends and the public institutions to take care of those wounds that don’t wear bandages, the wounds of the heart.

“To guarantee that you can return to class to enjoy and learn.”

It comes after the young boy’s sister told TV reporters that bullies ‘called him fag**t many times and always harassed him for it.’

Sanchez went on to call the boy brave for wanting to go back to school to study.

“The brave like you are the ones who end up finding true happiness in life,” the PSOE leader wrote.

“You have the vast majority of society by your side, who are proud to be diverse.

“Count on us to grow freely and without fear, to be as you want to be without anyone preventing you from fulfilling your dreams.”

LGTBQ+ rights groups praised the letter as ‘an institutional statement against LGBTIphobia.’

They added that there has been no contact from the local or regional government. 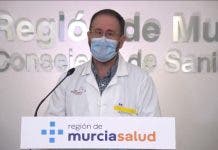 Alex Trelinski - 25 Nov, 2020 @ 19:15
UP to ten people could be allowed to meet to celebrate Christmas and the New Year in the Murcia region.