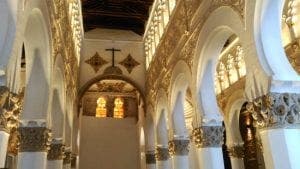 IT has the look of a mosque, the title of synagogue and the status of a Roman Catholic Church.

A religious monument like no other, the experience of setting foot in Toledo’s Synagogue of Saint Mary the White is as impressive as Cordoba’s more famous mosque-cathedral.

I was dazzled by the golden ornamentation, whitewashed walls and forest of Moorish arches. In the central atrium, sunlight streamed in from circular side windows illuminating a dark, bronze cross, hung high and proud.

Built by Islamic architects in the 12th century for Jewish use under Christian rule, the Synagogue of Santa Maria la Blanca was meant to be a symbol of the religious tolerance that existed, albeit briefly, on the Iberian Peninsula before the brutal Inquisition took over.

Ironically, today it is an icon of anti-Semitism and the subject of a theological tug of war over its rightful ownership.

Seized by the Catholic Church in the 15th century but marked by all three faiths, the complex intertwining of histories is beyond the scope of the two-paragraph information panel on the wall. 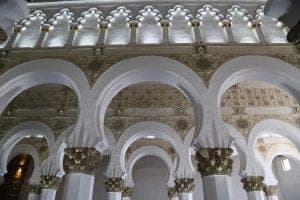 For Spain’s small but thriving Jewish community, the synagogue stands not as a beautifully-designed building or even a holy place. It is a potent reminder of anti-Semitism, oppression and the legacy of the Inquisition and they want the Synagogue of Santa Maria la Blanca returned to their ownership.

The building is a blatant example of how the Catholic Church in Spain prevents the Jewish community from educating the public about their history, says Isaac Querub, President of Spain’s Federation of Jewish Communities..

Transferring ownership would acknowledge the history of the tourist hotspot, hand a key piece of heritage to its rightful owners and pave the way for interfaith dialogue and closer Judeo-Christian relations by righting past wrongs, he added. The plan is not to make it a place of worship, instead Querub would like to see it become a museum.

But the Catholic Church is unmoved. Earlier this year, the Archdiocese of Toledo issued a three-page response to the Jewish community, reiterating ownership of the building, which it obtained by government decree in 1929, and stressing the Church’s role in restoring it.

The Catholic Church in Spain has yielded little to the Jewish community compared to the individual actions of local communities and the Spanish government. From Pope Paul VI’s call in 1964 for better relationships between the Catholics and Jews to the law introduced in 2015 offering Spanish citizenship to Sephardic Jews who were chased out of the country, there has been a concerted effort to extend the hand of reconciliation, even if the offer may be hundreds of years late. 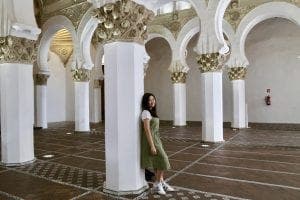 Visitors to the synagogue may wonder, as I did, why there is so little information offered about the history and importance of this hauntingly beautiful attraction. But I also wonder if the Jewish community were allowed to present their own story, could the very nature of the Synagogue of Saint Mary the White evolve into something much different than it is now? Could it change the anti-Semitism that still plagues parts of Spanish society today?

The answers to these questions remain elusive but one thing is for sure, only with open communication and mutual respect between both parties can this century-old conflict be buried once and for all.

FROM THE ARCHIVES: Superstition emptied a Spanish village in the 14th century before turning it into a must-visit festival

New stars are born, and only one lost, as the celebrated Michelin foody bible reveals its pick in Spain...

Simon Hunter - 30 Jan, 2023 @ 20:00
A TOTAL ban on taking electric scooters onto any kind of public transport in Catalunya will come into force on February 1.  The prohibition comes...