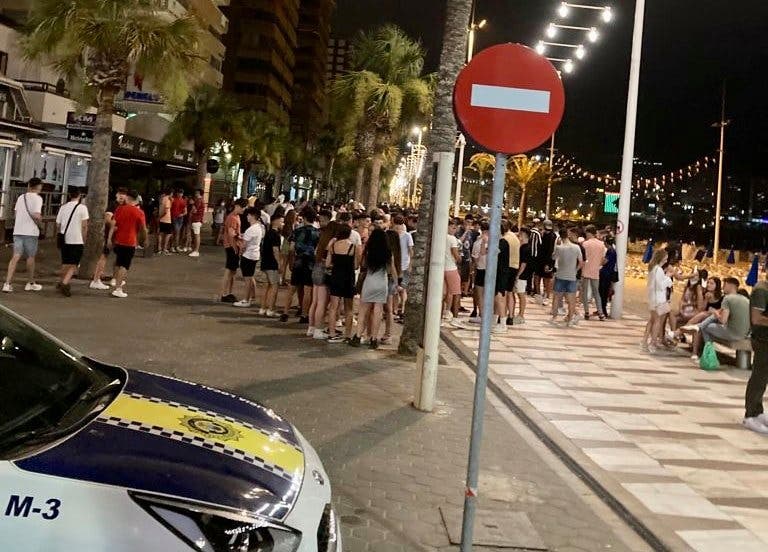 BENIDORM police officers have been accused of turning a ‘blind eye’ to new COVID health restrictions.

The force has been slammed by a local politician for not stopping crowds of young people congregating on streets late at night.

A police union has reacted angrily and called for a retraction of the comments.

Ciudadanos party spokesman on Benidorm council, Juan Balastegui, said: ”Based on the numbers of young people at night, the Policia Local seems to be neither around nor expected to be around.”

“Worse still, we see patrols with irresponsible people who continue to do what they want, perhaps because there’s a lack of officers to control them,” the councillor added.

Penalties have also been increased for illegal outdoor drinks gatherings and no more than ten people are allowed to congregate in public or in private.

The Professional Union of Local Police and Firefighters(SPPLB) have demanded that Balastegui apologise for his remarks.

An SPPLB statement said: “If Balastegui had been informed before questioning the work done by the Policia Local, he would have found that out that patrols and work is done continually in the urban area of the city until after 4.00 am.”

The union added that duties included ensuring that beaches were cleared of people by 10.30 pm and dealing with ‘hundreds of calls about illegal home parties’.

It stated that officers had been ‘spat at by violent young people’.

The SPPLB concluded by demanding that Balastegui ‘rectify his reckless comments that disputed the honour and integrity of the Policia Local which had caused social alarm’.