Home Other News Environment Why the Mar Menor in Spain has become Europe’s saddest example of... 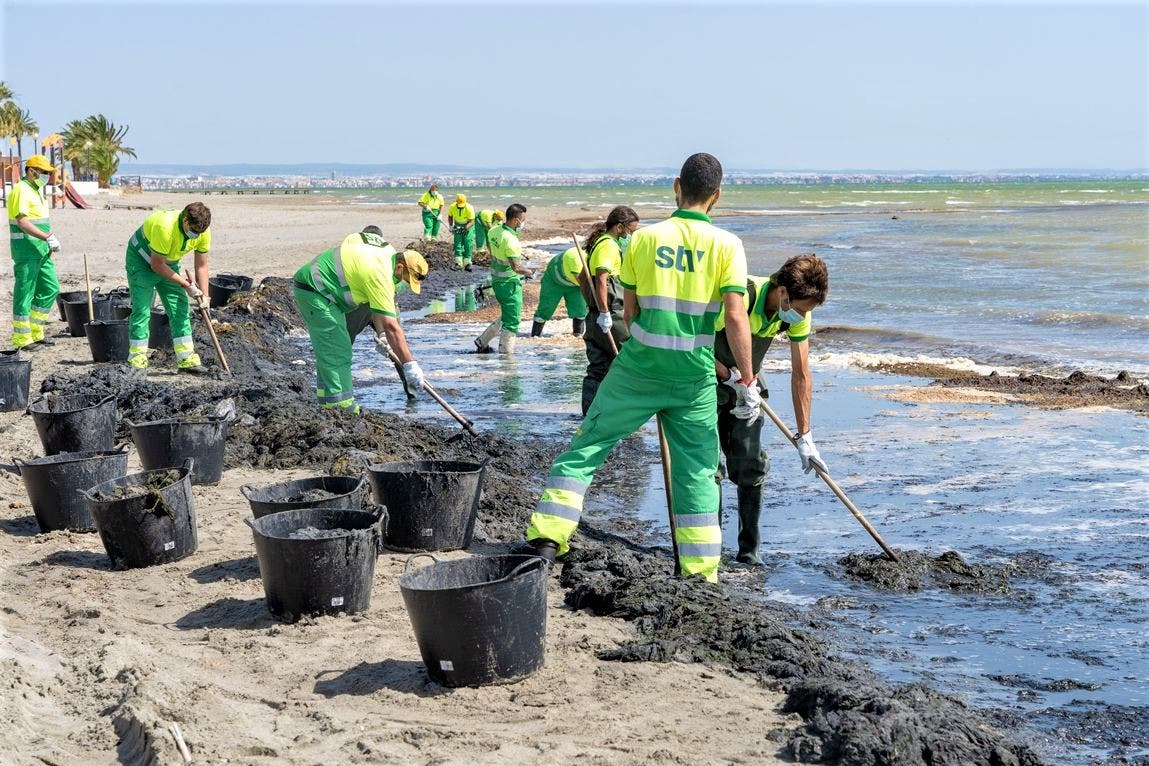 THE Mar Menor in Murcia is Europe’s largest saltwater lagoon but also one of the continent’s saddest stories over the ravages of pollution.

It’s an area that should be talked about in terms of beauty with its varied flora and fauna.

Instead there’s a stream of reports over how pollution has ravaged the lagoon as people in power stood by and appeared to do little or nothing about it.

Some parts of the lagoon shore look fine at first sight.

But go to the southern shore and to Punta Brava beach in Los Urrutias, which used to be packed with visitors a few years ago.

It has seen most of its golden sands turned into a dirty mush and replaced by algae with a pungent ‘rotten-egg’ style stench.

The water is distinctly murky in colour and there’s barely a bather to be seen.

Cleaning teams from Cartagena City Council come and go, but are faced with a thankless task as any work is quickly undone with a fresh wave of algae sweeping in.

Los Urrutias is one of the worst Mar Menor pollution blackspots because its close to a creek dumping nitrate-laden water from farms into the lagoon.

Warnings were sounded over four decades ago that farming, urban development and mining were seriously threatening the Mar Menor’s ecosystem, but it all seemed to fall on deaf ears.

Isabel Rubio recalled:“In 1980, I remember a scientist saying that if farming developed close to the lagoon, then remnants of fertilisers and other nutrients would end up in the water and would annihilate the flora and fauna.”

There were other issues, as from the 1970’s, tourism started to boom with construction peaking from the mid-80’s onwards along the shore.

Dredging work, hitting the eco-system, was also carried out in the lagoon to allow bigger boats to get in.

But the biggest environmental threat was the large number of unlicensed desalination plants used by farmers for land irrigation around the Campo de Cartagena.

A law change in 1979 led to irrigated areas going up ten-fold, with a quarter of the Campo ‘watered’ without a licence.

It was good news for internationally-exported crops that saw their reliance on rain reduced.

Fruit and vegetables ended up on UK supermarket shelves with customers oblivious to the environmental price paid to get them there.

The crop boost was bad news though for the Mar Menor lagoon.

The desalinated water from the farms contained chemicals from fertilisers as well as residues from old opencast mines.

Politicians and water authorities appeared to be largely unconcerned about the legality of the desalination plants and any side-effects because farmers were in the money.

Unfortunately, the economic consequences stretch far beyond agriculture with tourism a vital plank in the Mar Menor economy.

Jo Scott has lived in the area for 16 years and four months ago became a PSOE member of Los Alcazares council.

“We are working on new ways to remove silt residues from our beaches because once you go into the water for a swim, it is crystal clear.”

Jo, along with many campaigners points the finger of blame at the regional Murcia government run by the Partido Popular since 1995.

“The government has paid little attention to the Mar Menor for decades,” she declared.

“Los Alcazares council is fighting for the area to get legal status in a unique way, where we want the local ecosystem to be classified as ‘having rights’ to give it extra protection.”

That’s the possible future but recent history brings up a sad catalogue of incidents.

In 2016, phytoplankton, also known as microalgae, came under attack, due to the high quantity of nitrate in the lagoon water.

They became so dense with nitrate, that they turned dark green.

That stopped sunlight reaching lagoon vegetation, which saw 80% of it wiped out, according to the Institute of Oceanography.

A year later, all of the Mar Menor’s beaches lost their ‘Blue Flag’ status because of what happened.

Weeks later, 55,000 people marched on the regional parliament building in Cartagena to call for action to save the Mar Menor.

“We just had enough and the floods were the last straw,” said La Manga resident, Graham Bradley.

“There was anger that nothing had been done for years about preserving such a beautiful area, It’s incomprehensible why this has been allowed to happen,” he added.

Four months ago, the Ministry for Ecological Transition in Madrid produced an ‘action plan’ to improve the state of the lagoon.

This includes clamping down on any illegal behaviour that pollutes the area with the promise of ‘severe’ penalties.

As for bringing the polluters to justice, it is a long-haul job.

Two years ago, a joint report by the World Wildlife Fund(WWF) and the Southeast Naturalist Association(ANSE) claimed that ‘over 1,000 desalination plants had been used up to 2017 pumping poisonous nitrates into the Mar Menor’.

The WWF and ANSE said that politicians ‘actively permitted desalination’ in protected areas.

Murcia judge, Angel Garrote, is currently working his way down a new list of 43 farmers and businesses who were sold illegally-used water desalination units that were used on the Campo de Cartagena.

That’s in addition to a four-year investigation that Garrote is also running that has implicated dozens of firms and individuals.

Prosecutors have threatened legal action against Murcia’s Environment Ministry if it does not investigate ten companies accused of polluting the lagoon.

The European Parliament launched a probe last year into what four Murcia presidents, all from the Partido Popular, did or did not do to prevent pollution on the Mar Menor.

The United Nations got involved this year in hearing complaints from environmental groups that Spain breached international rules over the lagoon.

Not a single politician or administrator has been brought to account for their actions or inactions in a Spanish court.

The whole sad tale is even murkier than the colour of the waters at the Mar Menor’s Los Urrutias beach.