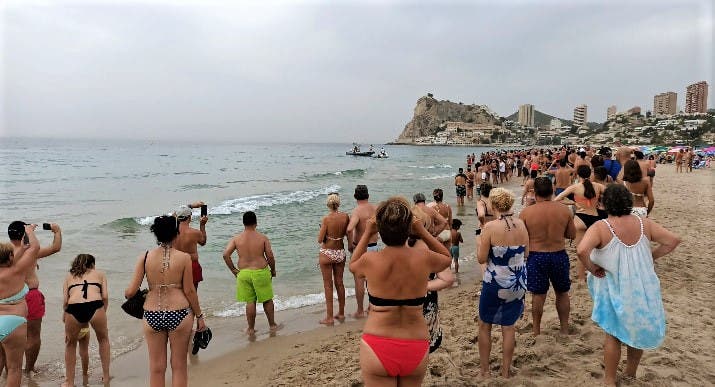 BATHERS were cleared out of the water at Benidorm’s Poniente beach on Thursday morning (August 12) after a blue shark swam close to the shore.

The two-metre long specimen was sighted at around 11.00 am at the beach section close to the El Murtal ravine.

The area was cordoned off as Benidorm’s Policia Local maritime unit tried to coax the animal to return to deeper waters.

Their initial attempts proved to be futile suggesting the shark was either sick or had suffered some kind of injury.

Experts from the Oceanografic de Valencia arrived later to help the disorientated shark.

A spokeswoman from the local police force in Benidorm confirmed that the two-metre long shark had been returned to open water and that normal beach activities resumed on Thursday afternoon at 3pm.

“When we became aware of the presence of the blue shark close to shore on the Poniente beach we called for a team of marine biologists from the Oceanographic Institute in Valencia,” a Policia Local spokeswoman told The Olive Press.

The shark was held within a specially designed sling and carried alongside a police launch to transport it to deeper water away from the shore. The team from the Oceanographic Institute in Valencia identified it as a female blue shark and said it measured 2.5metres from tip to tail and weighted around 80kg.

“They examined the shark which appeared to be disorientated and found there didn’t appear to be signs of any illness or injury. Using specialist equipment they steered it away from shore into deeper water where it swam away,” the police spokesman said.

“We reopened the beach shortly after,” she said.

“No-one was injured and it seemed to be a happy result for the shark,” the spokeswoman said.

Blue sharks are one of the most common sharks in the Mediterranean but rarely appear close to shore and are generally harmless to humans:

However, they do occasionaly appear in shallow waters and several have washed upon beaches across Spain in recent years.

A dead specimen was discovered at Guardamar del Segura last September and a deceased blue shark was found on a Santa Pola beach in February 2018.

Article updated at 6pm to include details of shark release