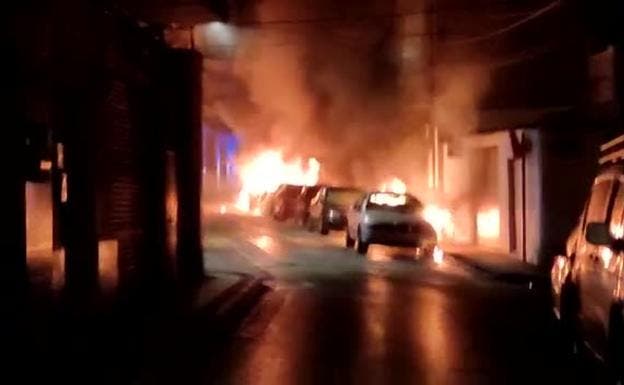 A street in a Murcia region was plunged into chaos this Tuesday morning when a man threw Molotov Cocktails at several cars and fired a shotgun at police officers.

Residents on Molina de Segura’s Gran Via were stirred from their sleep at around 6.15 am when the man, 52, set fire to seven cars, six of which were incinerated.

The resulting blaze spread to a two-storey property where the perpetrator lived with his parents and other family members.

Emergency services had to rescue them from the home.

They all needed treatment for smoke poisoning and the man’s father suffered serious 40% burns to his body.

Shortly before the fires started, a street cleaner called the police with a sighting of a man brandishing a shotgun.

When Policia Nacional and Policia Local officers arrived at the blazing scene, he fired at least three times at them, but the shots went into street walls.

A search of his home uncovered gun cartridges covered in petrol along with Molotov Cocktails.

It’s not unknown what led to his actions this Tuesday morning.