Once bitten, not exactly shy, the world’s most famous shark attack survivor tells BOB MADDOX why we must embrace the fearsome predator… or risk losing the oceans themselves

BE afraid. There is a casual killer on the loose in Mediterranean waters these days. It never rests. It is clever, swift and indiscriminate. It has an insatiable greed – killing far in excess of its immediate appetite. Keep an eye peeled for the dark shadow against the water, the swiftly slicing silver wake across the surface – signs that the deadliest predator ever to haunt the world’s oceans is upon you.

It is official. The Mediterranean Sea is now the most dangerous place on Earth to swim – that is, if you are a shark.

A recent report from the World Conservation Union (IUCN) identifies the Mediterranean as having the highest percentage of threatened sharks and rays in the world. Around 42 per cent of Mediterranean species are now seriously at risk, with 30 species threatened with extinction, according to Claudine Gibson, the IUCN shark specialist.

But let us pause for a moment because, “Well, here we go again,” I hear some of you sigh. “Yet another angst-ridden environmental article informing us what swines we all are and how just defenseless poor nature is.”

Well, let me confess. I have some sympathy with you here, particularly where sharks are concerned. After all, a shark can rather tend to spoil a good recreational swim. And despite the fact that the sea is their natural home, I dispute the contention that they have more right to be in it than I do.

I adore the sea. It can get into the blood like nothing else. In a sense, it really is in the blood of each one of us – its salty chemical signature a reminder of the far distant time when the common ancestors of all terrestrial life lived and died in the world’s oceans.

These are powerful echoes from the dawn of time. By the time that the first fish had developed rudimentary limbs, begun to colonise the land and begin the long evolutionary climb to ourselves, sharks had already been around – and eating them – for tens of millions of years.

So, maybe it is no surprise that, through all my happy times of floating and sinking, the occasional thought surfaces from the Dark Side of these ancestral memories: just what else might be in here with me? For I confess to be one of the many who are afflicted with mild selachophobia – a fear of sharks.

All it takes is a shadow in the water to induce mild panic, while a fin-shaped plastic bag skidding across the surface has me involuntarily adding to the Mediterranean’s burden of raw sewage. A diving buddy once tapped me on the back at a depth of 20 metres, with catastrophic results.

So, the recent IUCN report that the Mediterranean sharks are fast swimming toward oblivion, should surely be welcome news to the likes of me. An ocean without sharks? Hmm.

To find out whether this would be such a bad idea, I asked a man whose opinions had been forged at the sharp-end of the ocean’s apex predator, the world’s most famous shark-attack survivor, Australian Rodney Fox.

December 1963. Fox was defending his title as South Australian Spear Fishing Champion, when his life was changed in an instant of violence.

“All of a sudden there was a huge crunch. Something hit me in the chest and I was hurled through the water. It was just a nightmare.” 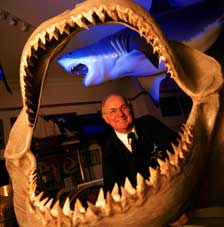 The attack by Carcharodon carcharias – or the Great White shark to you and me – left Fox with a horrific catalogue of injuries. Surgeons used 462 stitches to sew his chest, arm and stomach back together and 45 years later, he still has a “huge fold” in his side and part of a Great White tooth embedded in his left wrist.

Today, he heads the Fox Shark Research Foundation and is the world authority on the beast which once nearly bit him in two.

With his unique perspective, who better to ask if the Med would be a better place without sharks?

“The conservation of the Great White, as well as all other types of sharks and rays, is of utmost importance to the health of our oceans,” he said from his Adelaide home.

“Shark and ray populations are suffering due to human impact, and even more so in the highly populated Mediterranean. Therefore, urgent measures need to be taken in order to protect these fascinating and essential species.

“It is good to see the Olive Press highlighting these issues – I wish you every success.”

So why are they “essential” Rodney?

“Sharks eat and pursue the sick, the weak, the slow, the ones with viruses. Sharks keep pressure on all the populations. Without them, there’d be a big mess in the oceans.”

Signs that Fox’s “big mess” is brewing out in the Mediterranean are already with us in the shape of jellyfish plagues – a sure sign of a disturbed food-chain. Jelly fish incidentally, kill lots more people worldwide than do sharks. Last year, there were between 60, compared with one recorded death by shark attack.

So what is killing our sharks? Well, you guessed…we are; principally through the fishing practices called Bycatch and Finning.

Bycatch, as the name suggests, occurs in commercial fishing fleets when other species – fish, seabirds and mammals – are caught along with the target species.

Having no commercial value, the bycatch is simply dumped back into the sea, dead. Today, around one-third of the fish that are caught world-wide, are discarded as bycatch – killed without providing food for anyone.

With commercial fishing fleets notoriously secretive about such matters, accurate figures are difficult to come by, although some estimates claim that more than 100 million sharks and rays alone are discarded as bycatch every year.

Different fishing techniques tend to kill-off different species as bycatch. According to conservation group WWF, nets tend to kill dolphins and whales; longline fishing wipes out sharks, seabirds and turtles, while bottom trawling scrapes the sea floor clean. Along with sport fishing and habitat degradation through coastal development, these are the threats that are currently decimating the sharks, dolphins, turtles, whales and rays of our Mediterranean Sea.

Sharks in Atlantic European waters face an additional threat. Their fins, it seems, make rather fine soup. From Spain, France, the United Kingdom and Portugal, vessels are setting out to satisfy the appetite of south-east Asia for shark’s fin soup.

Finning is a brutal process. It involves slicing the fins off a shark and simply rolling the still-living animal overboard. Rudderless and powerless, the shark is doomed to drown or be eaten by others. But since sharks suffer from a bad image, cultivated by 30 years of misrepresentation in films and books, finning goes largely unnoticed in a world where cute-eyed seals grab all the media attention during the annual Canadian Seal Cull. Jaws did sharks no favours whatsoever.

Whether a practice such as finning could exist in any other industry or with any other animal, is surely debatable. Imagine, for example, the outcry if jamon serrano was produced by slicing the hind legs from a living pig and then simply discarding it.

With shark fins currently fetching around 500 euros per kilogram on the Hong Kong market, it comes as no surprise that EU countries take over 115 thousand tonnes of sharks each year from the Atlantic alone.

Spain, incidentally, is the major player here, accounting for 45 per cent of the total EU catch.

Finally, it is worth considering that sharks have swum the oceans of this planet for more than 400 million years.

The shark is older than the Pacific and Atlantic Oceans themselves. Sharks witnessed the drift of continents around our planet and were there before the gigantic cometary hammer blow of 65 million years ago that consigned the dinosaurs to oblivion.

Sharks watched as the rising waters of the Atlantic spilled over to separate Africa from Europe and form the Mediterranean Sea itself. They have witnessed more ice-ages than Al Gore has organized conferences on Climate Change.

And now, they need our urgent help. So perhaps it is time that we at least tried to show a little long-overdue respect for our elders – even if we cannot quite manage to find them loveable.

And yes, there are Great Whites in the Mediterranean, but the chances that you or I will be lucky enough to see one are fast disappearing in a cloud of jellyfish.

Rodney Fox and the Fox Shark Research Foundation can be found at www.sharkfoundation.net, where you can get your shark questions answered and even adopt a Great White. Be sure to mention the Olive Press in any contact.