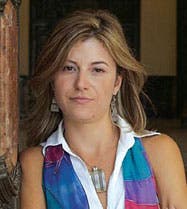 By JON CLARKE and LAURA BALFOUR

THERE will be more conflicting perfumes than views.

In the new look Spanish cabinet, Jose Luis Rodriguez Zapatero has gone for the feminine touch.

The cabinet will have more women than men for the first time in Spanish history.

This bevvy of beauties has been brought in to the government to boost the economy, fight climate change and promote equality.

Zapa’s Guapas, as the Olive Press is dubbing them, puts the celebrated Blair Babes and France’s glamorous female politicians to shame.

As well as putting a fresh spin on Spanish politics, the new cabinet announced at the weekend will also have the youngest ever minister.

Bibiana Aido – Bibi to her friends – is at 31, the true Babe of the cabinet, in more ways than one.

Heading up the new Ministry for Equality her responsibilities will include dealing with domestic violence and .

Heralding from Cadiz, she is renowned as a techno-enthusiast and already has her own blog (amenece en cadiz).

Other leading ladies brought in include Christina Garmendia as the new Minister of Science and Innovation.

Doctor Garmendia was a former genetics professor at the Independent University of Madrid and founded the Genetrix Group, pioneers in biotechnology.

Beatriz Corredor, 39, will to take charge of Housing as the property market suffers its worst slump in years. One of the toughest tasks for the mother-of-three will be keeping the government’s promise to build 150,000 houses a year over the next decade.

Carme Chacon, 37, will head up the Ministry of Defence and, as the only politician from Barcelona, it is good news for Cataluna’s Socialist party.

Chacon, with no military experience and two months short of giving birth, is one to watch. On Monday she carried out her first inspection of the troops.

Most importantly for the Olive Press the new minister of the environment Elena Espinosa is now in charge of both environment and agriculture.

Zapatero has highlighted the environment as one of the biggest challenges of his government. His decision to merge the two ministries as a result of previous conflicts means Espinosa is faced with a more than ample task.

They aim to continue the fight against climate change, with a new focus on sustainable development.

Zapatero’s new blend of government supports his view that there are too many men in positions of power throughout the country.