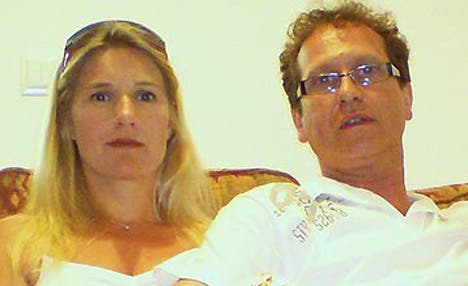 A BRITISH tourist is seeking tighter controls at Spanish zoos after he and his family were allegedly attacked by a loose animal.

Lee Levett, who is on holiday in Spain with his young family, contacted the Olive Press 24 hours after claiming to have been attacked by a goat in Murcia’s Terra Natura zoo.

Nursing his injured thigh and arm, the property developer from Reigate in the south of England described how he feared for his two daughters lives as he shielded them from the crazed beast.

“I had to push them away as the goat charged us. If it had made contact with them, they would have been hit directly in the face. And at the speed it was running, I fear to think what would have happened,” he said.

He then explained how zoo officials were “not interested” when he told them what had happened and “ignored” him when he asked for the police to be called.
He also was stunned to discover that the angry four-foot-high goat was allowed to roam the zoo compound.

The family’s ordeal began as they made their way through the popular tourist attraction. Levett, 45, explained how he, his wife and two daughters had just visited the bear compound when they were confronted by the angry goat.

“We just opened the door to enter the next part of the zoo when we saw this big animal standing in our path. It had a long, shaggy coat and curly horns. I thought ‘something is not right here.’”

Levett, who is staying at the exclusive Mar Menor golf resort at La Manga, said how he quietly ushered his wife, Judith, and children, six-year-old Georgina and Francesca, 4, back into the previous enclosure.

“We had to do a double take as we could not believe what we had seen,” he said.

After a few minutes, however, the goat was still there. “My youngest daughter opened the door again, and the beast was there, staring at us with its crazed yellow eyes. It then put its head down and charged at us. It was terrifying,” he said.

He then told the Olive Press how it was “sheer luck” that his daughters were not seriously injured or even killed by the animal.

“I pushed my family out of the way and got hit by the goat on the left thigh and arm. It hit me with such force it sent me sprawling before I managed to fight it off. If either of my girls had been hit, I dread to think what would have happened.

“It was lucky I was there to save them.”

Bruised and battered, Levett was left even more horrified when he made his way back to the zoo’s entrance.

“I went to the first aid office but nobody seemed to care that I had been attacked by an animal. I asked them to call the police, but they refused and simply told me to fill in a complaint form,” he claimed.

“I cannot understand how this was allowed to happen. I do not want anyone to go through the same ordeal.”

A spokesman for Terra Natura denied the attack and said Levett had provoked the animal.

“After more than 200,000 visitors, this is the first time we have had reports of an animal, especially a herbivore, attacking a human. We believe Mr Levett provoked the goat in some way for it to act like it did.

“He also refused all offers of medical advice and behaved in an abusive manner towards zoo staff,” Antonio Pacheco said.