By Jon Clarke and Paul O’Connell

ANGRY residents have slammed the hypocrisy of allowing new homes to be built beside the sea, while a coastal law is threatening to knock down thousands of others.

The group of expatriates have set up a pressure group Save Our Costa to draw attention to the Vista del Mar development in Mijas, that is under construction around 20 metres from the sea.

They claim that the pair of luxury villas is in clear infringement of the national 1988 Coastal Law that declares any new construction built on rural land within 100 metres of the shore illegal.

Since the law was ratified in 2007 a large number of authorities are enforcing the demolition of houses infringing it.

In Cadiz, for example, the scheme will see 187 kilometres of Atlantic coastline freed from homes and hotels built within the past 20 years. Authorities are creating a network of footpaths and at least 52 homes in Rota and Vejer are to go with discussions with Chipiona, Chiclana, Sanlúcar and Barbate continuing.

In Estepona, the controversial Prasa hotel was knocked down last year, while in Asturias and Galicia numerous other homes are under threat. 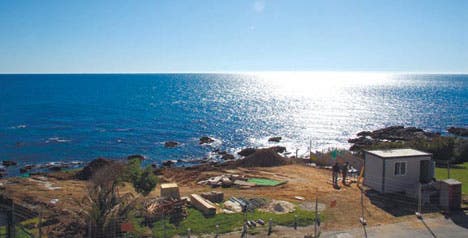 The Coastal Authority is even now looking at doubling the law to 200 metres.

But due to a planning fudge Mijas town hall is allowing the villas to be built insisting they are legal.

A councillor confirmed that the development now has a building licence after being rejected on two previous occasions.

According to documents seen by the Olive Press, the owner was given the licence to build two semi-detached villas in Urbanisation Torrenueva Playa.

The owner, who is apparently from a wealthy Fuengirola family, had first applied in 2006, but was turned down. She was again turned down in 2007.

The plot was due to be declared green, non-development land under the 2005 Mijas town plan (PGOU).

But this plan has so far not been ratified by the Junta, meaning that Mijas can only work according to the 1999 town plan, in which the land was declared ‘urbanizable’, or available for development.

But, according to neighbours, this still doesn’t explain why the land was declared urban, in an apparent breach of the 1988 coastal law.

Jan Payne, 59, whose husband John is the President of the neighbouring Los Flamingos urbanisation said: “I couldn’t believe my ears when I heard the trucks turning up last week and putting up a fence.

“We have had no warning and are very surprised it is going ahead. It is a complete joke and we are seeking an injunction banning the construction. Surely the 1988 Coastal Law takes precedence?” The group held an emergency meeting this weekend and have instructed a specialist lawyer to look into the legality of the issue.

As the paper went to press, lawyer Alejandro Criado Sanchez was pouring over legal documents going back to the early 1990s.

“At the very least he believes the foundations suggest they are building something larger than agreed,” explained Payne.

A town hall source explained that the licence was not given before because Mijas made a new town plan (PGOU) in 2005, where the plot was to be green zone.

“When it wasn’t ratified the owner appealed against this new situation, along with 10,000 other owners,” he said. “It has now been granted subject to being built 26 metres from the sea and leaving a six-metre path for walkers.”

Neither the PSOE mayor Antonio Sánchez Pacheco or head of planning was able to explain the apparent discrepancy with the 1988 coastal law, as the Olive Press went to press.

“They will probably need four or five days to get a response,” said a member of the Mijas Foreigners Department. “The mayor may not even know about it. He has only been in power for a year or so.”

Payne meanwhile is disgusted. “Most people living here are understandably unclear on what the law is around building near the beach.

“The laws in Spain are clearly very open to interpretation. It seems crazy to knock down old fisherman’s houses in one part of Spain, but build new villas in others.”

The group has set up a pressure group and an email for people to register their anger and comments. It is saveourcosta@hotmail.es