THE former mayor of Manilva told a court that 762,000 euros found at his home were “anonymous donations” to his political party.

Pedro Tirado insisted that he kept the donations, given to him by “grateful” members of the local community, in a Calvin Klein toilet bag and not in bin liners as has been reported.

He is accused of reclassifying land belonging to Royal Marbella Estates in exchange for three million euros.

When asked why he kept the donations at home, Tirado responded: “It’s rude to open an envelope in front of someone.” 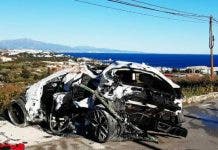