A 24-year-old girl recalls the night that ‘heroic’ Dan Smith tragically stood up to defend her honour.

The A-level student, who is off to London to study psychology, had been unwinding with friends in the popular The Lounge Bar on the Costa del Sol.

“I was standing talking to a friend when I suddenly felt something going up my leg. I initially thought it was my friend’s boxer dog, but when I turned around I noticed this guy rubbing my leg.

“He had been sitting down on a sofa by me with a couple of friends. I had not noticed him before.

“He insisted he had done nothing, but there were at least two other witnesses and one of my friends stood up and said: ‘What are you doing?’

“Next thing he snapped at both of us, he looked really aggressive and shouted about ‘cutting off our heads’. He said it to all of us and looked really scary.

“It was then that Danny stood up and came over to calm things down.

“He was really friendly and did it in the most amicable of ways. He was certainly not aggressive.

“But Eric lost the plot and ran over and tried to punch him. Dan put his arms up to protect himself and the fight was broken up.

“He kept saying ‘why are you doing this?’, ‘what is the problem?’. But Eric wouldn’t calm down and said: ‘I’ll be back.’

“Dan was a heroic, brave and selfless man and it is appropriate that his last words should be about getting everyone else to safety.”

“It was about half an hour before he came back, but what was really spooky was that a ginger-haired friend of Eric, an English kid, who is apparently only 14, had waited outside on the other side of the road, simply watching us.

“When Eric returned on his bike, driving past the pub, I told Dan we should all just get in the car and head for home. But Dan said it was too late and told everyone to get into the pub.

“Just as we had all gone inside we heard the gunshots outside.

“A few minutes later we went out to find Dan lying on the road outside. Despite calling around a dozen times the ambulance took 45 minutes to arrive, which is shocking.

“Everyone was gutted for Dan. I blame myself and perhaps should not have said what I said to Eric. I am gutted

“Dan was a heroic, brave and selfless man and it is appropriate that his last words should be about getting everyone else to safety.” 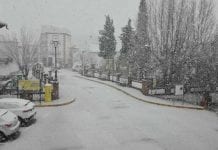