FOR avid map readers, the double loop in the A-7000 above Malaga must hold some allure.

This is the old road out of Malaga north and should win awards for scenery, with your ears literally popping as it ascends into the Montes de Malaga national park.

It was up this road that my wife and I came when we first settled in Spain seven years ago.

En-route to our first rental home in Andalucia (me planning to write a book, my wife concentrating on painting) we couldn’t have found a better way to arrive in the Axarquia.

Stopping for lunch at 400- year-old Venta Galway – which takes its name from an Irishman, who moved there when the British market couldn´t get enough of the area’s sweet muscatel wines – you have a birds eye view of the Axarquia. 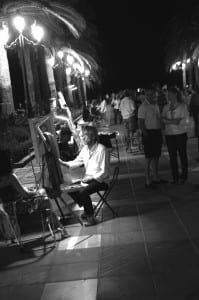 Not only spectacular in landscape, the Axarquia, a hamshaped wedge that cuts inland from the beach resorts of Torre Del Mar and Nerja, has much to offer in culture and increasingly in food and wine.

It has not always been so visitor-friendly though and dauntingly, as one guidebook points out, the little-known region has only been physically safe for tourists to visit for the last few decades.

Indeed the Axarquia (pronounced Ass-Ikea) has long been fabled as one of Spain’s most inhospitable zones.

A former haunt for bandoleros, or bandits, who preyed on traders carrying goods to Granada, it was also a popular route for smugglers bringing contraband into Spain from Africa.

Such was its volatile nature (the coast was regularly attacked by Barbary pirates) that the area’s inhabitants built fortified villages, with watchtowers in the hills inland.

The region is completely steeped in a dramatic history of rebellion, resistance and renaissance. The evidence is all around: churches built on mosques, streets named after revolutionaries, inns dedicated to highwaymen.

Battlefields meanwhile litter the area and it was here – in Comares and Frigiliana, in particular, at ‘El Fuerte’ – that some of the last few battles were fought between the Christians and Moors during the Christian reconquest of Spain.

Later, it became a hotbed of republicanism and after the Spanish civil war in the late 1930s, became one of the key escape routes and hideouts for left wing soldiers.

From here they launched frequent guerilla attacks against dictator Franco’s victorious army, and weren’t officially beaten until the mid 1950s.

Dissected by deep ravines and criss-crossed with streams, it is easy to see why it was such a hard area to pacify. The confusing pattern of rutted hills mean that journeys that look tiny on the map can, and usually do, take quite some time.

But that is very much pàrt of the Axarquia´s charm, a bucolic landscape of whitewashed villages and due to a fabulous microclimate, plantations that include – unlike anywhere else in Europe – mangoes, avocadoes and bananas.

“It has a wonderful microclimate stretching all the way up to Periana,” says landscape gardener Lee Talbot, who has lived here for five years.

“You don´t get extremes of weather and almost any plants will grow given water.”

Its mountainous borders – that include Maroma at over 2000 metres – serve a double purpose, protecting the region from extremes of temperature and also drawing in moisture to aid its agricultural sector, which is still reasonably strong.

First inhabited by the Phoenicians, who planted acres of vines, and later the Romans, it wasn’t until Moorish times however, that the region began to truly thrive.

Part of the cultured kingdom of Granada, great fortified towns and palaces went up and it was here – as mentioned – that the Moors made some of their last collective sighs, before being vanished, via the Reconquest, back to Morocco. 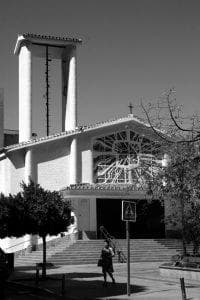 There is certainly much evidence of their civilisation, particularly in the main market town of Velez Malaga and the heart of Comares, where in the claustrophobic Calle del Pardon, 30 families of Moors, were spared their lives after publicly converting to Catholicism.

Indisputably the spiritual heart of the Axarquia, Comares straddles a hilly outcrop and has heart-stopping views.

The magical white-washed village is a maze of windy alleys full of Arabic touches and has set itself up well for tourists offering a clever guided tour by footsteps etched into the ground.

Nearby, the tabletop mountain of Masmullar holds an atmospheric and distinctly moving excursion. While Comares remains completely intact, it was here that the ninthcentury palace of Ibn Hafsun was built and while all that is left are its cellars (albeit with ornate pillars still clearly visible) around it – somewhat eerily – lie the piles of stones, that were once his subject’s dwellings.

From here head towards Colmenar, a centre for bee-keeping, or Riogordo, a curious place, stuck in a dip in one of the region’s many folds. A gritty town, full of run-down houses and troll-like men in caps, it’s worth a stop to suck in the atmosphere of Real Spain. It has a half-decent museum of antiquities, and most importantly a great place to eat, the Lemon Tree in the heart of the town.

Driving back towards the coast, you should certainly take a poke around Periana, perhaps stopping at Cantueso for lunch.

You should also certainly head for a bit of shopping in the curious, fast-growing settlement of Puente Don Manuel, where hundreds of expatriate Britons, who live in the area, stock up on all their essentials.

There is fish and chips, a British dentist Ian Pett, English pubs and the famous Arkwrights shop, selling everything and anything you might care to miss from Blighty, while living in Spain. Thankfully, there is also a great place to get a coffee and lunch at Morenos.

While there may be no more bandoleros, there are a good many more tourists

Keep going and the road eventually leads through well cultivated, but interesting land, to the historic commercial town of Velez Malaga, a much underrated and little visited place, which thrives on its market and excellent shops.

Even better, it is soon to have a parador, with the celebrated national chain having identified the town – and more importantly the key building, an ancient convent – where it is to expand.

Next up it’s the coast and if that’s your thing, well take your pick from the celebrated Nerja, the down to earth Torre del Mar or Torrox and its excellent beaches. But be aware, while there may be no more bandoleros, there are a good many more tourists clogging up the hotel rooms, not to mention sunbeds.