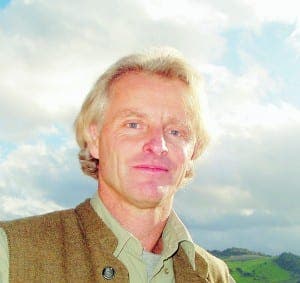 IT is an idea that has been in the formulation stage for a decade. But when Spain’s best-known English walking writer Guy Hunter-Watts got a spare 21 days he jumped at the chance to hike from one side of Andalucia to the other.

Dubbing his new route the Andalucian Coast to Coast Walk, the plan was to find the most evocative and scenic way to get from the Mediterranean to the Atlantic.

“The idea of a long distance walk linking the two great ocean’s which cradle Andalucía had long intrigued me,” explains Watts, 50, a keen traveller, who has written a series of books about Spain. “But after plotting the route across the southern mountains, life took an unexpected turn and the project lay dormant for almost a decade.”

However, the appeal of charting the walk never diminished and on his regular writing trips (he is also an inspector for travel website i-escape) he slowly sketched it out.

A born romantic, he was particularly moved by the notion that Carthaginians and Phoenicians, Greeks and Romans, Visigoths and Moors had all walked through the string of mountains that run across the south of the peninsula. He also found it hugely inspirational to think that it was along the valleys of southern Iberia that Man first walked out of Africa and into Europe.

“The notion that the walk would be following in the footsteps of so many ancient peoples was both humbling and hugely exciting,” explains Watts, who lives in the typical white-washed village of El Gastor, near Ronda.

“If it was the Mediterranean that gave Spain its identity it was the Atlantic which would offer it a leading role on the world’s stage and it was this temporal progression that made me decide to walk from east to west rather than vice versa,” he explains.

“I wanted the route to link as many of southern Spain’s Natural Parks as possible and for each leg to be structured so that it could be comfortably covered in a full day by anyone in reasonably good health,” he continues. “And, above all, I wanted to avoid tarmac at all costs.”

The result of months of research, trail-bashing and many a doubling-back is a stunning, 21 day trail which traverses no less than seven of Andalucía’s most beautiful protected areas.

The trail begins on the lovely stretch of sand beneath Maro, just east of Nerja. Cutting inland via the incredible Liman trail – an amazing first day of walking – the route leads on through stunning hilltop villages including Frigiliana, Alcaucín, Carratraca, Jimena and Castillo de Castellar.

The walk takes in fascinating towns, like Ronda and Tarifa and key archaeological sites like Barbastro, the Cueva de Nerja and the Roman ruins of Baelo Claudio.

It also follows long sections of Roman and Berber footpaths and leads you through deep gorges and over high passes.

The final section of the walk follows a sinuous mountain trail down to the Atlantic Ocean where the walk ends beside the beautiful beach of Bolonia.

Over the course of this 430 kilometre trail you’ll see ibex and deer, mongoose and foxes, vultures and eagles, yet will meet with few other walkers along the way.

Should you walk the route in its entirety you’ll have journeyed from sea to ocean through the heart of one of the most beautiful tracts of mountain in Europe.

“At the end of this Iberian odyssey I hope its followers will agree that the whole is even greater than the sum of the parts and that the walk will remain as treasured a memory for them as it does for me,” he concludes. 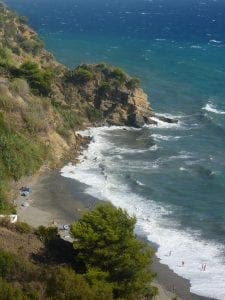 The Coast to Coast footpath’s starting point is on the beautiful stretch of beach which lies just beneath Maro, one of the prettiest villages of the Costa del Sol, next to the Mediterranean Sea. After climbing up to the village past the old sugar cane factory the day begins in gentle mode as you head along a broad forestry track, cutting north from the Cueva de Nerja into the rumpled massif of the Sierra de Almijara. After passing the picnic area of El Pinarillo things take on a different tempo as the trail roller-coasters its way west towards Frigiliana across four deep gorges. It hardly seems possible, when you behold such wild mountain scenery, that you’re only a few kilometers inland from the urban sprawl of the coast. This is a walk to be savoured so get going early and take plenty of water.
* The Nerja cave is well worth a detour if you’ve set out early in the day.

The walk begins on the beautiful Playa de Maro next to the lifeguard’s chair. Take a deep breath: you have approximately 430 kms of mountain trail ahead of you.

Head west past the beach’s shower and taps then cut right and climb a steep stone staircase. At the top bear left and head up a concrete road which passes a car park then arcs right, still climbing, before looping left and crossing a water course. The road climbs steeply between greenhouses and subtropical vegetation then levels as it runs towards the village and the ruined structure of El Ingenio de Maro.

Here turn left off the road and follow a rough path which cuts up past the Ingenio then climbs a flight of steps to reach the road. Here cut left along Calle Virgen de las Maravillas and follow the road as it arcs round Maro’s southern flank with a balustraded walkway running to its left. Passing the Casa Romántica Hotel the road loops right then once more left past a No Entry sign. Bearing once more right you reach a junction opposite Bar La Entrada.

Turn left and follow the right side of the road past the Hogar y Centro Social Maro to a roundabout. Here take the second exit signposted Cueva de Nerja, pass beneath the motorway, then head on up past Hotel Al Andalus. The road arcs right before running up towards the black metal entrance gates to La Cueva de Nerja. (25 mins)

Don’t go through the gate (unless you plan to visit the cave) but rather angle left past a sign for Área Recreativa El Pinarillo and a map of the G.R.242 (being waymarked as this book goes to press). After a few metres you pass a green barrier then head straight along a broad forestry track which climbs gradually upwards, ignoring any smaller tracks branching right or left: wooden posts with white arrows mark your way. You reach a fork where one sign points left for Área Recreativa El Pinarillo and another right for Sendero. (1 hr)
Here branch left. The track continues to climb and eventually arrives at El Pinarillo. Here the track divides again. Bearing left past a map of the park head straight through the picnic/camping area. You can replenish your water bottle 50m past the map at taps (W) next to a barbecue. At the far end of the picnic area, after passing a threshing circle, continue past a green barrier then drop down a broad track and cross a (dry) riverbed.

20m beyond the riverbed the track divides. Take the narrower, left hand path which climbs steeply and shortly crosses the track you’ve just left. Head on up a deeply eroded path. You reach a broader track where you’ll see a marker post. Don’t turn right here (this fork leads to the Fuente del Esparto) but rather turn left along a broad track which ascends to the top of a pass where it passes a No Entry sign. Soaring views open out to the north and west. Continue along the track: angling hard right it runs up to a chain blocking vehicle access. (1 hr 45 mins)

Continue past the chain remembering that you’ll be cutting left on to a narrow path in approximately 950m. You pass two marker posts to the left of the track then, at a point where the track cuts right, reach a third post and a large cairn. Here cut left on a narrow path which zigzags steeply down into the Chillar gorge: you’ll see a few marker posts as you descend. The path drops down past a small ruin, crosses a water channel, then continues down to the riverbed. (2 hrs 15 mins)

Here bear right at a blue arrow on a rock along the river’s east bank for 30m then cross to the opposite bank via stepping stones. Look for blue arrows. After running close to the river’s west bank for about 50m (where there are rock pools where you can take a dip in the warmer months) the path angles left and begins to climb. You reach a point where the path divides by a marker post. Here cut left and continue to climb: the path is marked with green and blue painted dots. Eventually you reach the top of the second pass of the walk. (2 hrs 45 mins)

Beyond the pass the path, deeply eroded in parts, descends into the next valley, soon crossing a (dry) streambed. It then climbs for a short distance before descending again and crossing another stream where there’s a cairn and a marker post. After crossing two more (dry) streambeds it climbs to the top of a third pass where views open out into the next valley. The vegetation becomes sparser, the result of a forest fire in the recent past. The path again descends and crosses another (dry) streambed before climbing to the top of the fourth and final pass from where the Higuerón valley is visible to the west. The path runs along the spine of the ridge and, after passing a marker post where there are views both east and west, runs gently downhill just east of the ridge to reach a divide by a marker post. (3 hrs 35 mins)

Here cut right by a rock with blue waymarking on a narrow path which loops down through a stand of pines to the valley floor and a sign for Frigiliana/Fuente del Esparto. Here, swinging left and descending, you pass a white hut then a large water tank. The track leads on down the valley then loops across to the river’s west bank towards a large green water pipe where it becomes concreted. Following the track steeply upwards through groves of avocado trees you reach the edge of the village, then the Unicaja bank and, just beyond, the Plaza del Ingenio and the Frigiliana taxi rank. (4 hrs 10 mins)