CREEPING along the narrow exposed pathway hugging the El Chorro gorge I accidentally looked down through one of the glaring gaps in the concrete.

A river rumbled over 100 meters below me while a vulture, perhaps knowingly, circled overhead.

It was absolutely terrifying and for a couple of seconds I froze and thought there was no way I could go on.

But it would have been anything but easy to turn back.

I was already half way along Malaga’s infamous Caminito del Rey, the world’s most dangerous walkway and, what could soon be, Andalucia’s premier outdoor attraction.

Built in 1905 to connect two hydroelectric plants, the pathway has sadly fallen into serious disrepair.

Currently it is missing its handrails and in three sections the floor has actually caved in leaving just the metal frame. 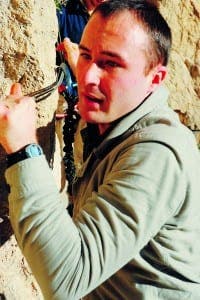 It has been officially closed to the public since 1999 because of the safety concerns. In the last 10 years alone, six people have died on it and 30 people have been injured. But this has not stopped the path from remaining a rite of passage for any fun-loving Andalucian youth.

And those willing to brave the heights are certainly rewarded with one of the most beautiful walks in the world, as well as an incredible adrenaline rush to boot.

Most accidents have been caused by the recklessness of local daredevils not taking the correct precautions and the path is generally safe to cross with the right safety equipment and, above all, an experienced guide.

Indeed, on a good day the Caminito is full of adventure seekers as the El Chorro area is one of Europe’s top climbing destinations.

“The guards took off parts of the wooden planks hoping it would stop people walking through,” said my guide Martin Heywood, from Merseyside, 45, who has lived here for six years.

“What they didn’t count on was that most people here are climbers.”

But the hair-raising travail along the deteriorated concrete path, with its naked steel beams poking out above the abyss will soon become a thing of the past. 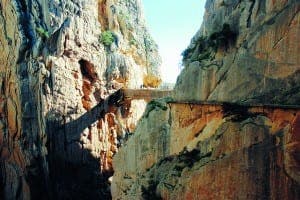 Work is set to begin any time soon and by 2016 the Caminito is expected to become a world-class outdoor attraction, with easy access for all.

Setting off from the village of El Chorro, visitors will be able to easily reach the pathway and then walk through the breathtaking gorge all the way to the beautiful Guadalhorce reservoir above.

The opening is expected to become a massive dynamo for the so-called ‘Lake District’ area of northern Malaga.

And is expected to see thousands of tourists arriving from around the world every week to rise to the challenge.

The Olive Press revealed exactly a year ago, that it had been added to the official government boletin as a key tourism project.

A strategy document seen by the paper, estimated that around 1000 people a day would pay three to five euros to travel along the path.

They will be carefully monitored by up to 100 employees with safety being of major importance.

“There could even be special trains brought in from Madrid, just for the experience,” revealed a local hotelier.

The village of El Chorro itself is a peculiar outpost of several dozen houses perched between hydroelectric plants and imposing crags.

Little would tell an unsuspecting visitor that this hilly hamlet between Malaga and Antequera is a world-famous climbing hub.

One of the main focal points for foreign climbers is undoubtedly the Olive Branch B&B run by Surrey expats Gary and Melanie Burns.

On Boxing Day when I visited it, the B&B was packed with outdoor enthusiasts from around the world recovering from a large communal Christmas meal the night before.

“We took over this inn in 2008, without realizing it was right at the foot of the Las Encantadas crag, one of the best climbing locations in the world,” said Gary.

After a late communal breakfast, lodgers head off for the crags.

“If the sun is out, it’s perfect conditions for a day of climbing. It’s never too cold around here,” said my guide Martin.

“The limestone rock here has plenty of nice holds and there are loads of pre-made routes,” he continued.

“You just need to bring a harness and chances are you’ll meet someone to climb with here. It’s a very friendly place.

“Whatever grade you climb doesn’t make it any more or less enjoyable.”

Londoners Matt and Tom Williams, who came to El Chorro for a Christmas holiday, agree.

“It’s been a great experience,” said Matt, 25. “The climbing community is very welcoming, even if you haven’t done much climbing. People are always trying to help you out.”