THEY say a dog is man’s best friend. And nowhere is this truer than in the UK.

But until very recently the same could not be said for Spain.

Dogs chained up around the countryside and dumped by the roadside, donkeys thrown out of towers or left in the midday sun, their hooves tied together. These are just some of the shocking images that come to mind.

In part due to a lack of money, and part the result of cultural attitudes, the Spanish – in general, it should be stressed – have never shown the same love for animals as the British, or say, Germans.

However, remarkably, this seems to be changing.

As the country gains in wealth and stability, more and more Spaniards are taking the lead from the over-zealous animal-loving expat community.

It has just emerged, for example, that an altruistic millionaire recently left all of her fortune to three animal charities.

The single woman from Madrid left a total of three million euros to 50 donkeys, 225 lynxes and 400 cats and dogs.

Never before has a Spaniard left so much inheritance to animals.

So could Spain be a new nation of animal lovers?

A survey by the animal health laboratory Intervet/Schering-Plough recently found that 98 per cent of Spaniards believe you should go to jail if you abuse an animal.

They also believe that laws need to be tightened to criminalize cruelty.

Last year the Catalan parliament voted by an overwhelming majority to ban bullfighting after officials were presented with the signatures of 180,000 people demanding an end to the carnage.

Earlier this year, the iconic tradition of bullfighting was banned from being shown live on TV.

On top of this there are now a plethora of animal charities springing up across the country with over 50 in Andalucia alone.

Many of these were set up by Spaniards, who were appalled by what they saw here and decided to take up the slack.

He said: “I think the difference between the British and Spanish attitude to animals goes with the level of social advancement.

“Up until the last 20 or 30 years Spain was very impoverished and people had to tend to their basic needs, they simply didn’t have the money to care for their animals.

“It is all about priorities. Now things are more advanced and you can see the wealthier cities like Barcelona and Madrid showing more interest in animal welfare, with Andalucía, which has always been poorer, catching up too.”

And he added: “Our charity started eight years ago with 300 members, most of whom were English, now we have grown considerably and have 9,500 members with about half of them Spanish.”

Of course, the British are long known for their passion for pets. They love to give to animal charities and – incredibly perhaps – there was a Royal Society for the Prevention of Cruelty to Animals (RSPCA) before there was a charity to prevent cruelty to children.

Two years ago it emerged that the British public had given more to a donkey sanctuary than to the three most prominent charities trying to combat violence against women.

For some this was a sure sign that the country’s priorities were a little askew.

According to the latest figures, 14 per cent of the 10.6 billion pounds donated in the UK goes to animal charities.

And Britain ranked eighth place in the CAF World Giving Index with 53 per cent of people giving to charity.

In comparison, Spain only came in at 91st with just 27 per cent, suggesting that here, charity certainly begins at home.

Marjorie Bedford, an administrator for Costa del Sol animal charity ADANA, believes this is part of the problem.

“Brits are certainly more used to giving to charities,” she said. “Sadly, animals have been more of a tool than a pet here in Spain.”

This is reflected in the late arrival of Spanish charities dedicated to animals.

While the RSPCA can proudly claim to be the world’s first animal welfare charity, founded in 1824 in contrast, ADDA, the first Spanish NGO devoted to animals only arrived in 1976. With this in mind, it is little wonder the Spanish have often been criticised abroad for their lack of animal compassion.

From the abandoned animals that litter the countryside, to the incidents of cruelty at local fiestas, the opinion of many is that animal welfare is simply not a priority in Spain.

Above all, of course, the country has come under fire for its long held tradition of bullfighting. 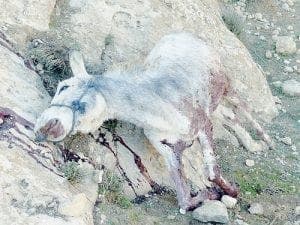 Last issue we revealed a Huelva man had been arrested for keeping an eagle and a wolf tied up at his house.

And in 2008 the Olive Press brought you the shocking story about wealthy hunters Davíd Jimenez and José de la Flor, who were jailed for killing defenceless tigers and lions they had bought from a zoo.

The group was caught red handed in December 2005 when they posed with the bullet-ridden tiger they had ‘can hunted’ on the huge estate near the village of Monterrubio, in Extremadura.

The reaction of many expats was that something like this would never happen at home.

But, like everything, there are two sides to every story.

Many Spaniards are now taking up the cause and, let us not forget, not every Briton is a
credit to the national obsession.

Last Christmas the Olive Press revealed how it was a Spaniard who had to pick up the pieces after Briton Suzanne Jenkins – dubbed the ‘horse killer’ – had fled Spain after dozens of her animals died due to cruelty.

It was thanks to new owner Juan Berges Torres the remaining horses were saved ,and he spent over 10 months working with vets and nutritionists to nurse the horses back to health. “I didn’t do it for the money, just for the horses,” Berges told the Olive Press.

This trend towards compassion has also been noticed by Wendy Thorne, president of Costa Animal Society (CAS), based in Nerja, now celebrating its 25th year.

She said: “Things are changing for the better; we now have more Spaniards joining the society and donating money than before.

“British culture is still far more animal orientated. But then it is not very long since many Spaniards had no money to care for themselves let alone their animals.

“Now they have more money, and the younger generations show a lot more concern.”

But she added: “Although the Spanish are becoming more aware the government still doesn’t give money to animal charities.

“The town halls would rather save the palm trees.”

So like everything, it all comes down to money.

And in the wake of the recession many charities, which are almost entirely dependant on donations from the public, are again struggling.

“If it wasn’t for our parent company in the UK we would simply not survive at the moment,” said Benjumea from the Donkey Sanctuary.

But at least the ball has certainly started rolling and there is a growing awareness in Spanish society about animal welfare.

They may still consider their pets as animals rather than companions unlike their British counterparts. But they are considering them.

Hopefully, as the economy picks up over the next year or two, more and more Spanish will realise that charity not just begins at home… but pets and animals also deserve some charity outside of it.