JON CLARKE takes a trip along Andalucia’s most unspoilt, if sometimes rather breezy, coastline – and checks out accommodation on the Costa de la Luz


OVERLOOKING rows of vines and a sea of undulating umbrella pines the restaurant high up in the hills above Tarifa is extremely hard to beat.

With no signs, apart from a warning that you are entering a ‘military zone’ – it is a military mission in itself to locate the place.

But that is all part of the fun.

Called appropriately ‘Tesoro’ – or Treasure – this is one pot of gold that really is worth seeking out.

Aside from the fabulous food – including fresh langoustines and a classic ‘retinto’ steak typical of the region – the views over Tarifa and across the Gibraltar Straits to Africa are impossible to improve.

To a backdrop of cow bells and a light, lilting breeze, we watched an enormous container ship slowly making its journey impeturbably westwards.

Peace personified, in the far distance a wispy line of silvery clouds sat atop the huge Moroccan landmass, one of the mythical Pillars of Hercules.

The Moors would never have had it so good on arriving in Tarifa in 710AD.

While later dubbing Andalucia ‘paradise’, it was certainly anything but peaceful when they used the town as their bridgehead into southern Spain.

This is quickly obvious wandering around Tarifa, its historic ramparts littered with statues and references to stirring catholic heroes such as Sancho El Bravo and Guzman el Bueno.

It is a similar story along the celebrated coastline known as the Costa de la Luz, or Coast of Light, that stretches all the way from Tarifa to Cadiz.

This is Europe’s true deep south; a windswept flood plain, fringed by long dune beaches and crowned by a series of austere ‘cubist’ towns, which were built by the Moors who ruled this land for nearly 800 years.

If you have never taken a ride to these shores, just the other side of the Rock of Gibraltar and Algeciras, you are in for a surprise.

There are literally miles and miles of mesmerising and largely unspoilt white, soft and sandy beaches, ideal for a bucket-and-spade-break away from the over-built towns the other side of the Rock.

Sightseers will be spoilt by the numerous sites from the famous Trafalgar lighthouse – off which the crucial naval battle once took place – to the historic fishing village of Sancti Petri and from the Roman ruins at Bolonia to the twisting, white-washed streets of Conil. 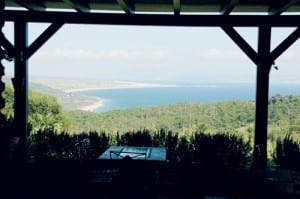 The two main towns are Tarifa – a Mecca for kitesurfers – and Vejer, a hip and alluring escape, where cabinet ministers and celebrities occasionally rub shoulders.

And then there are the hidden gems, like exclusive Roche, where Madrid’s captains of industry take their holidays, and Zahara de los Atunes, the sleepy fishing village, which is fast garnering a reputation for its food and wonderful beach.

And still there is more, with El Palmar claiming to have the best surfing waves in Andalucia and Europe’s largest sand dune, at over 30-metres in height in Bolonia.

And don’t forget Caños de Meca – the fun capital of the region – or gritty Barbate, whose fish restaurant El Campero is among the best in Spain.

But what best sums up this long stretch of coastline for me is the view you get while taking lunch at Tesoro above Tarifa or, in particular, at evocative Gadir in a converted windmill on the ridge behind Vejer.

For spreading out in front of you from here is an entirely uninterrupted ten-mile vista of rolling fields all the way down to the white sandy beaches of El Palmar and Conil.

An incredible sight, this patchwork quilt of greenery and long, unspoilt beaches in the distance is sadly practically unique to Spain these days, but what the majority of Andalucia’s coastline would have looked like 50 years ago

“This incredible expanse is like nowhere else around,” explains lawyer Carmen Atkins, who has been based in Vejer for two decades.

“The great mix of coast and hills and these lovely towns luckily still hold a lot of the old Spain in them.”

The coastline is certainly only matched in beauty by Cabo de Gata in Almeria and there is something incredibly haunting about the stunning windswept beaches, particularly around El Palmar.

While not an aficionado of its famous watersports – or to be fair its winds – there is something intrinsically different about the Costa de la Luz.

Laid back and unshowy, its friendly, unfussy locals compliment the breathtaking scenery and distinctive vibe.

The coastline is, without a doubt, for the more discerning tourist and, in particular, for lovers of fine food.

Vejer in particular has an incredible mix of stylish boutique hotels and perhaps one of the highest concentrations of top restaurants per capita anywhere in Andalucia.

This is a true food capital and over the last few years, I have found perhaps a dozen great places to eat within a ten mile radius of the town.

Tarifa has an altogether different feel.

This is a party town, particularly in summer, when the backstreets are heaving with lively bars well into the early hours.

Its stylish mix of shops and restaurants added to its melting pot of worldly Spaniards and interesting expats make for a distinct Tarifa scene, not dissimilar to the one you find in Ibiza.

Even better, it is one of the few places – thanks in the main to its breezes – that still has enough going on through the winter.

But alas, all is not well on the Costa de la Luz.

Just as is the danger in the Cabo de Gata natural park in Almeria, the economic pressures on cashing in from tourism are making inroads here.

It has already happened in the sprawling, ugly development of Novo Sancti Petri, whose endless roundabouts, golf courses and luxury condos give a flavour of the nearby Costa del Sol.

But there are all sorts of other daft plans on the horizon, including a crazy idea to build a huge apart-hotel development on virgin land, right by the beach alongside the stunning Trafalgar lighthouse.

While not yet confirmed, there have been whispers of a nine-hole golf course and, before you know it, of course, there will be the obligatory villas, then commercial centres, etc, etc.

“It would be crazy to allow all this to happen,” says Tarifa fashion designer Maria Malo of Mala Mujer.

“This is one of the very last unspoilt coastlines left in Spain.”

Atkins agrees. “The politicians here just don’t have any foresight.

“All they think about is jobs, but they haven’t figured out yet the quality of tourism that comes here already and can continue to grow.

“The good news is that young people at least seem to be against the projects so we will have to hope they can make themselves heard.”

There has at least been some good news recently, with the cancelling of a project that would have seen the size of Tarifa harbour grow by up to ten times.

“It is great news,” explains Swiss Beat Steffan, whose company Dwarf 8 is a new clothing company based in Tarifa.

“The new port would have completely ruined Tarifa if it went ahead. Thank god common sense has prevailed.”

Take a ride down to the Costa de la Luz to see why it is so important to prevent any further development.

Enjoy the breath of fresh air from its near neighbour the Costa del Sol and understand why this unique area must be saved from further development.