MY first thoughts on entering Marbella’s only vegan restaurant, Loving Hut, was how clean, bright and fresh the atmosphere felt – quite an achievement for a dull and rainy Saturday afternoon.

Staff bounced around in brightly-coloured t-shirts and the customers – comprised of Spaniards and young European families – looked every bit a picture of health.

A TV channel in the corner promoted a non-animal diet with subtitles in 22 languages, and on the walls hung pictures of famous vegetarians – some of whom I was already aware of such as Prince and Natalie Portman, but also a couple of surprises like Lady Diana and Brigitte Bardot.

Certainly, the message was clear – veganism is fun and getting bigger.

I went for the lasagne served with garlic bread and salad (9.90 euros).

Made with soya mince and topped with non-dairy cheese imported from the UK, the meal was tasty and went down very well with the fresh watermelon and pear juice I’d ordered to go with it (5 euros).

The best thing though was the lemon cheesecake with a cherry topping (4.20 euros), its texture identical to any dairy version I’ve had.

There was also a great-value menu del dia at 12.60, and children’s meals for around six euros.

“We’re trying to show customers a perfectly diverse menu that anyone would like,” said vegan owner Helen Holroyd, who is hoping to show with her venture that reducing our consumption of animals is the most obvious answer to the planet’s environmental crisis. 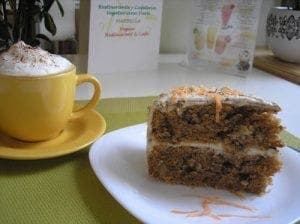