OCTOBER and November are the best months on the Costa del Sol for really enjoying where we live. We don’t have to fight our way into our favourite bars and restaurants; the cinemas start to play more films in “original version”; Salon Varietes, the English theatre in Fuengirola kicks off its annual run of plays and musicals; and, best of all, we can still enjoy glorious sunshine for much of the time!

We run around like headless chickens during the busy summer season, and have been known to suddenly find ourselves feeling a bit lost and wondering what to do with our Sundays. After all, there are only so many roast dinners that our stomachs and, more importantly, our wallets can take! Having said that, we did treat ourselves to a delicious roast beef and yorkshire pud last Sunday at the Paraiso Country Club near where we live. I’m sure it won’t be the last – it’s the perfect indulgence on a dreary Sunday, especially if followed by a traditionally stodgy English pudding with lashings of custard!

That leads me on to my biggest irritation at this time of year. Is it just me or do you also find that the working week seems to swallow up all the sunshine leaving me to endure soggy Sundays? So far, November looks like it’s going to fill up the reservoirs, but October has been fantastic with only one soggy Sunday and four sunny Sundays. Almost perfect!

So, what did we do with our free time? We walked!

For ages, we’ve been meaning to walk along the paseo with our dog from Puerto Banús to Marbella. Some friends suggested it one Sunday morning and, as it was amazingly warm for October, we packed some extra water for the dog, not enough sun cream for me (I managed to come home with a hand print on my back indicating exactly how far I got with the sun cream) and some pennies in case of an impromptu lunch/ice cream stop. 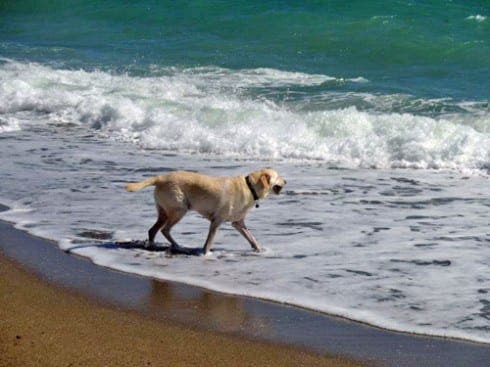 It was fantabulous! We met in Puerto Banús, under La Victoria, the 25m high statue of a man with arms outstretched towards the sea, and headed East walking over the new footbridge linking the Banús and Marbella paseos. When it first opened last year, the Spanish Minister of Tourism hailed it the longest bridge of its type in Spain at 70 metres long. Whether this is true or not, I have no idea! But to me, it looks great and just a little bit like a mini Golden Gate bridge.

The sun beat down on us as we strolled amongst three generational families, dogs, cyclists and some mad runners. That’s what I love about walking along seafronts wherever I am in Spain – the huge mix of people from all backgrounds, ages and cultures. There were gaggles of girls no doubt chuckling about their antics from the night before; children riding their favourite trikes and scooters; couples holding hands appreciating the romantic sea view; and then, of course, the obligatory older Spaniards, sitting on the benches watching the world go by.

A couple of hours later, we staggered into a chiringuito where a very willing waiter hurried to find us a table in the shade, suitable for a labrador to hide under. Our light lunch of fish and salad was exactly what the doctor ordered and refreshed us just enough for the walk back to Banús.

It’s a superb way to spend a few hours on a pleasant day, or a heady summer’s evening. We also like to walk along the paseo in Estepona from the Port to the town centre. Although it’s much shorter, there is still the sea to admire, the people to watch and sometimes, a little something out of the ordinary to ogle at as you walk by.