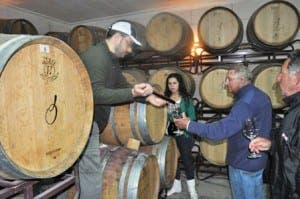 OUR local Friday Golf Society organised two visits to the Finca Onegar bodega in the province of Almeria in September and November 2011. The first visit coincided with the picking of grapes. The second visit was planned to coincide with the olive picking season but sadly due to the changing weather conditions we just missed out on seeing the olives being picked. Nevertheless both visits were a resounding success.

Around 25-30 people took part in each of the trips, each paying 15 euros for the trip around the bodega including lunch. We travelled to the bodega in a coach that went past the Western theme parks in the Tabernas area. We crossed a range of hills with magnificent views of various valleys and then went through a region where marble is quarried out of the hills. We then descended into the town of Purchena and were guided to Finca Onegar which is located on the outskirts of the town. Travelling to the bodega took around two hours and we saw some fantastic scenery.

The visit started just after 11am with coffee and water in the dining room. We then had a guided tour around the grounds that include a vineyard, olive plantation (including trees ove r800 years old), fruit trees, pigs and chickens. All of the ground is irrigated from underground water reserves.

The bodega is surrounded by hills with tree clad hills to the north and hills covered with herb plants and other hardy plants to the south. In September we saw grapes being harvested and processed. We also found out that the grapes are stored in a cold store for around a day after being harvested and before they start to be processed. 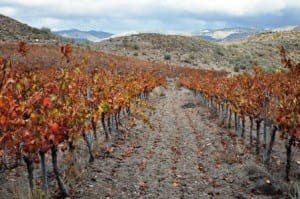 We had a wine tasting prior to lunch. In September we had a three course lunch in the bodega and in November at a local restaurant. On both trips we had the opportunity to purchase wine and olive oil from the bodega at the end of the trip.

On both occasions the day trip was well received by all who attended. So if you are considering a visit to a bodega in the province of Almeria I would recommend Finca Onegar.

Thieves walk out of Michelin-starred restaurant in Madrid with 132 bottles of wine valued at €200,000