RAFAEL Nadal has hit back at ‘funny’ suggestions that all Spanish sportsmen are on drugs, as depicted in a French version of the Spitting Image programme.

“It is meant to be funny and that’s OK once,” said the tennis world number two. “But when the butt of the joke doesn’t change, it becomes tiring.”

One of the clips, which were shown on the French TV channel Canal Plus, shows puppets of Rafa, three-times Tour de France winner Alberto Contador and seven-foot Spanish basketball player Pau Gasol signing documents with syringes.

It comes after Contador was stripped of his titles and handed a two-year ban last week for testing positive for performance-enhancing steroid clenbuterol.

Another clip (below) depicts Nadal driving into a petrol station with a low tank.

After drinking a bottle of water, he urinates into his car’s petrol tank then drives off at top speed – suggesting his body is so pumped full of drugs that he would be able to fuel a vehicle.

At the end of the clip the words ‘Spanish sportsmen don’t win by chance’ are displayed on the screen.

Spanish Sports Minister Jose Ignacio Wert described the programmes as ‘unfair, regrettable and in bad taste’, and some groups have even said they will take legal action against the channel.

Nadal however does not seem fazed by the suggestion that Spanish sportsmen only succeed because they are on drugs, saying he has heard it all before.

“I’m not worried,” he said. “The only explanation to our success is our desire to work harder and with longer hours.

“The success of Spanish sportsmen is down to several factors, such as spirit of improvement and self demand.”

He added that Spain had achieved more than France but with fewer resources.

“It’s not about pills and syringes,” he said. 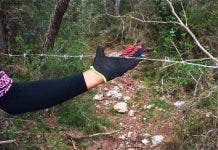