THIS was a weekend pilgrimage to the city of Madrid. As a lover of things, Madrid is my Mecca.

Madrid is an unassuming capital. Flying over the city a few weeks ago this pilgrim watched it emerge suddenly from roads that twist and turn like ribbons, following a patchwork of brown, olive countryside. A similar burst of city was achieved by road, or maybe I was delirious after 5 hours on an extremely hot bus. Stumbling, dehydrated and stiff, onto the metro that snaked down the pipes of the city, there was a tingle, a sudden realisation. I was in an underworld of reality, smoky and dirty. It was a real city, for real people, and the Mecca for a lover of things.

The artist Grayson Perry describes his current exhibition The Tomb of the Unknown Craftsman in the British Museum as a pilgrimage for a lover of things. His collection unites hundreds of cultural artefacts, moments in history and items of unrecognised art that have been lost in the corridors of the British Museum, left as relics of a time gone by. It is the work of a craftsman who has no name. The craftsman sculpts and builds monuments with magnificence and skill. Their names are swallowed by the passage of time and the buildings they create live in honour of kings or religions, “but in the end, the man they commemorate is the builder”, according to Grayson Perry.

Madrid cannot be described as art in its most common form. A famous painting, a delicate drawing, Barcelona, it is not. The art of Madrid is in the atmosphere, the character, the personality of the place and all the things you can find and encounter there provided by the anonymous craftsmen, the same kind of creative people that Grayson Perry acknowledges.

The first stop on this pilgrim’s route was El Museo Reina Sofía. It is full of grandeur and self-importance, but little corners hide dreamy humility. The room of proportional maps with figures about the shocking inequalities across the world leaves you feeling pensive, as do the thought provoking contemporary creations. Antonio López García displays his whispering paintings and sculptures, haunting and sombre. And of course La Guernica by Picasso stands impressive, glorified and deserving of 15 minutes of your time in order to take in every shape and symbol.

El Parque Retiro is an endless pilgrim’s march. It is a pleasant leg of the journey where self-discovery and contemplation occurs. The crisp cool symmetry and wondrous lake of rowing boats calms the soul. Surrounded by romantic book stalls where you can wade through all literary things, from Spanish classics like Cien Años de Solidad to back editions of National Geographic in English and containing words like tundra as if spoken from the mouth of David Attenborough himself.

An obligation for any pilgrim and lover of things in the city of Madrid is the biggest flea market in Europe; El Rastro. It is hugely over-crowded and full of tourist tat. Though, as the wise Perry explains: “Craftsman make artefacts they think will appeal to visitors from abroad. Sometimes they get it wrong in a charming way. Creativity is often just mistakes”. Keep this mantra in mind as you wade through the crowds and past the Hindu incense burning stalls selling completely untraditional mirrored elephant mobiles. You will soon filter onto the secret passages and plazas where any lover of things will be endlessly occupied.

One installation that particularly captured this lover of things at the exhibition by Grayson Perry was called Our Mother and Father. This was a sculpture of stuff, full of little items that we call junk. Cassette tapes, maps, archaic mobile phones, wicker baskets, a single shoe, bronze fruit, framed Virgins, antique spinning tops, articles in leather, faded postcards, sewing machines, tiny clock faces, puzzles, luggage, dog-eared magazines, boxes of records, glass ornaments, long coiled telephone cords, yet-to-be renovated furniture. At El Rastro there were blankets and stalls cluttered with this very same stuff. You approached, crouched on your knees like a pilgrim to its shrine, as if you were crawling under the omnipresent power of Guadeloupe in the Basilica of Our Lady in Mexico City, the most visited shrine in the world.

This lover of things would have sifted through these relics for hours if terrifyingly terse experiences in Madrid’s cafés and restaurants weren’t a nutritional must. People aren’t lying when they say Madrileños are rude.  Impolite waiters and dispassionate service in this city is not a falsehood. Just repeat after me: “Sometimes they get it wrong in a charming way”. 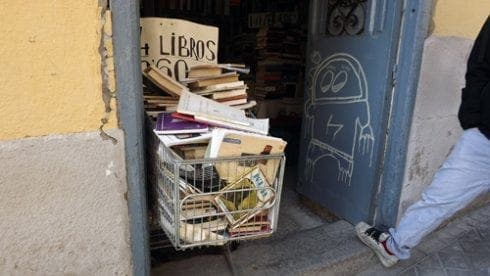 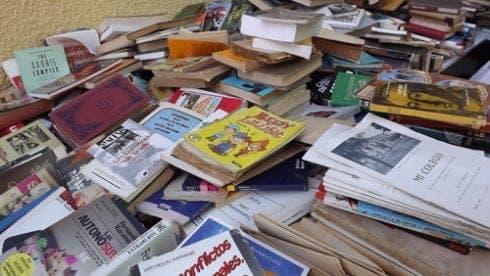