IT was the best news I had heard for ages.

Told that I had to avoid eating chacinas or cold meats for health reasons, the discovery that jamon iberico de bellota was cholesterol free was music to my ears.

“The fat is natural and has no polyunsaturates as long as it comes from acorn-fed pigs,” explained Domingo Eiriz Martin, from ham factory Eiriz, one of Spain’s highest-rated ham producers.

I was taking a tour of his factory/home, in the tiny village of Corteconcepcion.

Away from ‘Ham Central’ or Jabugo, this was not the most obvious place to find one of the region’s best producers.

But it soon became obvious that the village was surrounded by cork oaks, the vital vegetation from which the black Iberian pigs receive their main source of food: acorns.

Slaughtering approximately 120 pigs a week, the family firm, which has 10 staff, only uses pigs that have lived entirely on acorns.

“This is vital if you are going to use the label ‘jamon iberico de bellota de Huelva’,” explains Eiriz, who joined his family firm full time four years ago after a career as a lawyer. 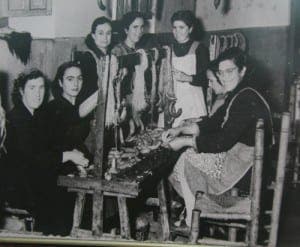 “I might be earning less and working harder, but I am working towards my future and putting this factory on the map,” he adds.

His hard work certainly seems to be paying dividends with the award-winning ham now being sold in 10 countries around the world.

Best of all he recently received a three-star gold award from London’s prestigious Great Taste fair.

“There are a total of 7,500 gourmet products from around the world, including teas, biscuits, sauces and marmalades,” he explains, “and they blind taste each product in groups with mine coming top for three years in a row.”

Have a full tour of the Eiriz factory and taste the products over a glass of beer for just 15 euros per person… contact Domingo on 678733443 or domingo@jamoneseiriz.com