THE general strike on Thursday was not full of promise, it was never a sure win. In fact everyone here knew that Rajoy would push through his cuts, austerity measures imposed on Spain by the European Union. They knew that the reforms would happen. On the morning of the strikes, it was front page news.

The propaganda was huge. Papers littered the streets advertising the “huelga general”. Trade unionists visited shops and businesses, asking them not to cross the picket line and go to work, despite the large proportion of pay they would lose. Public sector workers heatedly debated their rights. They wanted paralysis, impact and an element of mayhem.

Everyone was to arrive in the main square, Plaza del Castillo, without using public transport. And so the crowds arrived, streaming in from all corners of the city. Thousands upon thousands of people with whistles and fire crackers were chanting, brandishing flags and banners; expressions of their beliefs and strength. With an atmosphere buzzing in the air, gentle waves of people started their parade through the streets. There was not much hope of change, but a true need to demonstrate something, a quality amongst the people of Pamplona, of Navarra, of Spain. It was solidarity. All walks of life were in that square, from the highly paid to the ones on low-salaries, the young and the old, families and groups of friends. Together. 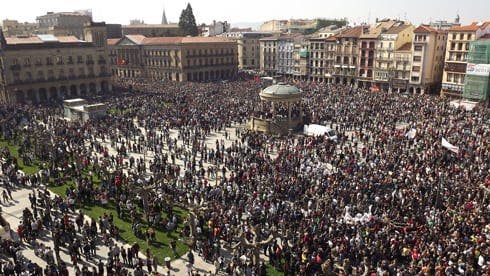 The unfortunate by-product of demonstrations like this are the people that attempted to strip the city of its dignity by vandalising shops, banks and any establishment that tried to open on the day of the strike. What they expected this to achieve, I’m not sure. They caused hundreds of thousands of Euros in damage and made the jobs of low-paid shop assistants more difficult as they had to peel off plastered on stickers and wash away paint bombs. They also cost the local government a lot of money in repairs. It ended in excessiveness. A riot, por fin.

The austerity cuts the government has introduced are said to the toughest in Europe yet. The labour reforms are a scary violation of rights. With a slowing economy, increasing unemployment, a lack of competitiveness and confidence from investors and rising debt that is becoming unmanageable, it’s difficult to be positive about the outcome. Rajoy has made his choice. But with 800,000 strikers across Spain taking to the streets, at least the people have shown they have a voice. Furthermore, it is not the end. There will be more strikes. There will be desperation. 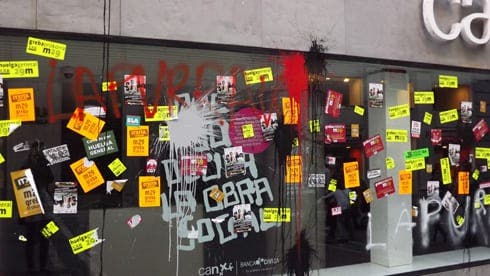 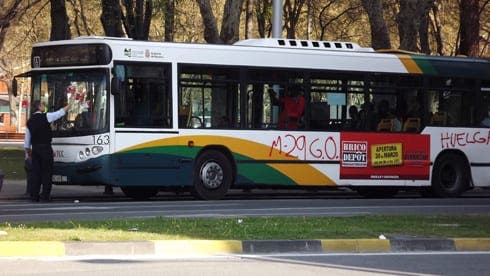