GRANADA requires a neck with 360-degree movement, some billowing hippy trousers and an empty tapas-hungry stomach.

The reign of the last Muslim king of Spain ended in 1492. The king was known fondly as Boabdil or el chico (the boy). He was forced to abandon the city and palace he called an “earthly paradise”. Whilst passing over the mountain el Suspiro del Morro (The North African sigh) on his way to the coast, Boabdil took one last look over his beloved Granada. Tears began to fall from his eyes. His mother comforted him with: “Weep like a woman for you were unable to defend your kingdom like a man.” I imagine this made him cry more.

We actually hiked over El Suspiro del Morro on a free night tour offered by our hostel. It was a death-defying climb over a powdery dry forest floor, especially for my friend wearing Roman sandals. It is also the source of most of the legends (and facts) I’m going to tell you about.

So, the Holy Empire ruled over Granada once more. Carlos V moved into the Alhambra palace in 1525. The two cultures, Islamic and Christian, endeavoured to live together in harmony. Power struggles did surface. I mean, power and struggles are the (unfortunate) way of the world, right? But the people of Granada had already learnt the art of tolerance and adaptation. Convivencia (coexistence) had developed. Carlos V spent some time trying to convert the Muslim people who lived in the hilly wind-tunnel streets of the Albaicín. Carlos demanded, half-heartedly it seems, that they no longer spoke their Arabic language and stopped practicing their religious customs. He wanted them to exchange the amulets that they carried around their necks for crosses. He even ordered them to change their names. The Moors retaliated, fed up with years of struggle and war – both civil and within their own ranks, and against the Spanish Crusaders – with a big pay-out that suited Carlos, and sent Christopher Columbus on his way to India (he discovered America instead, but that’s okay). And so harmony lasted.

As a result of this fusion of cultures, Granada developed into a wonder. Of course, the Alhambra is incredible and I’ll talk about it later, but the unique quality of Granada is in the convivencia. The streets are full of music. There are live bands made up of hoards of different instruments, influences and people, united under a blend of jazz, ska and reggae. There are communes where people experiment with sustainable living and sharing. You can find the rather ironically named Alhambra beer – I recommend it with a dash of limón – which is always accompanied with loaded plates of tapas. On hearing about the free tapas, I expected, with cynicism, a plate of olives or crisps in a bowl. But no, we got meat, potatoes, empanadas, fish and sauces. It was all served in huge delicious portions. Then, you can find Moroccan tea houses called Teterías (I’m unsure of the origin of this word but I presume it has little to do with tetas) and aromatic tagines served in dark sparkly restaurants. There are bazaars full of leather, glittering patterns and silky scarves. You should probably just go to Morocco for all of those things but we enjoyed wandering and bartering, marvelling at the diversity from street to street.

The Alhambra; an earthly paradise it is. Moorish poets described it as “a pearl set in emeralds.” Its name translates as The Red Palace, the reason for this is mysterious. There are many legends. Some say the hue in the stone that was used is rosy, others reveal the mortar was made from the blood of the strongest warriors.

One piece of advice: book your tickets in advance. Yes, people said “relax, Katie, you’re in Spain”. Yes, they said “I’m an on-the-day-kind-of-person”. If you want to get up at 6am and queue for hours in the hope of a spare ticket for that day (and no, you can’t anticipate a ticket for the following day, you just have to queue up all over again) then please do. This organisational queen bought everyone’s ticket online three days before and we explored the Alhambra for hours.

Arabic patterns made from colourful tiles and beautiful scriptures adorn every room. The pointed horseshoe arches and grand pillars form shapes around you, leading you past magical pools and through serene courtyards. Second piece of advice: look up! Every room has six  intricately sculpted surfaces so crane your neck and view the ceilings. Then look out at the preened gardens; orange trees, honey suckle and butterflies. Water flows all over the Alhambra in perfect tranquillity. Finally, there are photographic opportunities everywhere, as you can see! 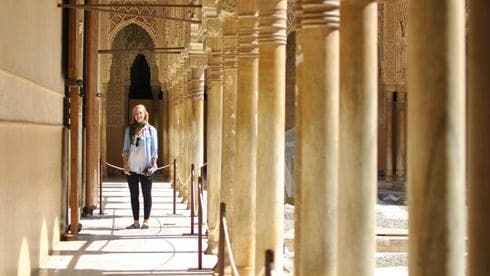 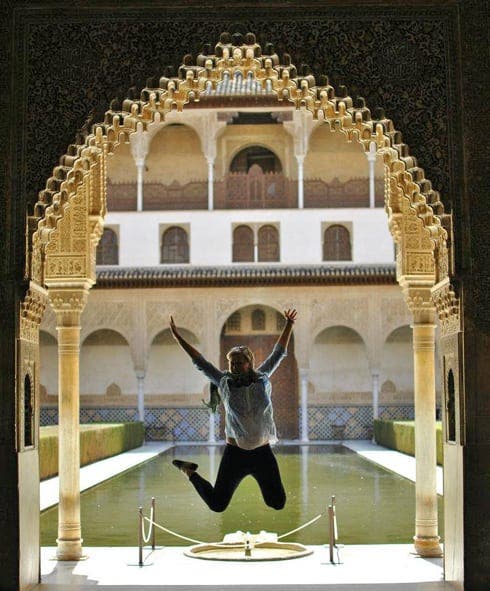 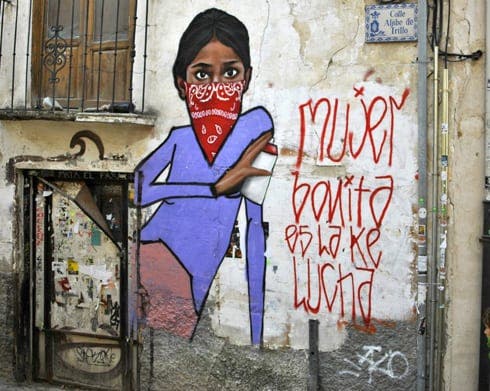 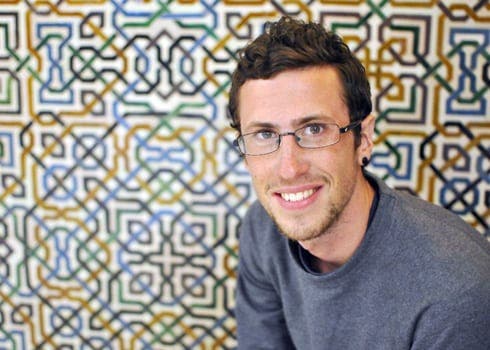