SPAIN’S economic troubles have taken yet another twist after 28 of its banks were downgraded.

Ratings agency Moody’s took the action against lenders, including Santander, on the same day that Spain formally requested a €100 billion bailout of its banking sector.

Some of the banks were downgraded by as much as four points and taking them deeper into ‘junk’ status.

Moody’s claimed it had acted because of Spain’s reduced ability to support its lenders and due to the vulnerability of the banks to the failed property market.

Economy minister Luis de Guindos however was much more upbeat, claiming the rescue package would cover all banks’ needs as well as providing a security buffer.

Two independent audits of Spain’s banks last week estimated the need for up to €61 billion, although the full results of the audit will not be delivered until September.

Spanish borrowing costs had soared past the critical seven per cent mark last week, but later settling down again, falling back to 6.5 per cent.

The announcement of Spain’s formal request for help was followed by reports suggesting that Cyprus may ask for financial aid due to its exposure to the ailing greek economy. 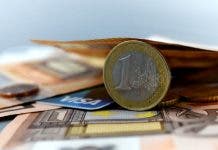