IN ancient Thai tradition, to be gifted a sacred white elephant from a monarch was seen as both a blessing and a curse.

On one hand it meant you were in the ruler’s favour, but it was also a curse as the animal was infamously difficult and expensive to maintain, without having much practical use.

Today the term ‘white elephant’ is commonly used to refer to overzealous – often corrupt – spending on projects with costs that far outstrip their worth.

Certainly, a stampede of these such white elephants has carved up Spain over the past two decades.

The economic boom since the late 1990s ushered in a golden age of ambitious expansion that exhausted the nation’s funds, increased borrowing and made the current recession sadly inevitable.

As money flowed into the country’s regional governments, officials invested in flashy projects designed with tourism in mind.

“During the boom, you had a competition between cities to see who could capture the most weekend tourists,” says Llatzer Moix, author of Arquitectura Milagrosa, a book that examines Spain’s obsession with massive urban design projects.

This competitive spirit among Spain’s 17 regions led to a rat race of epic proportions.

First to the finish line was the undeniably delightful Guggenheim art museum in Bilbao, which despite a price tg of €100m, effectively transformed a decaying city into a sprawling metropolis and popular tourist destination.

So successful was it, that dozens of cities around Spain tried to cash in on this so called ‘Guggenheim effect’.

“It seemed like a simple formula,” continues Moix. “Plan a cultural centre, get a star architect to build it, and voila.”

The problem was, other projects cost much more and proved much less successful. 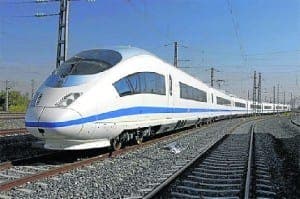 Take, for example, Valencia’s City of Arts and Sciences.

While delightful to look at, the project completed in 2005 cost four times its original budget at €1.1 billion.

Put another way, the centre cost more than half the €2 billion Valencia recently requested from Madrid in a bailout plea.

“Instead of worrying about education and healthcare, they wanted the glamour,” reflects Ignacio Blanco, spokesperson of the IU party in Valencia.

Even worse was the city’s so-called ‘Calatrava Towers’ residential project, which has been scrapped, but still earnt architect Santiago Calatrava €15.2 million.

Around Spain exorbitant projects were being undertaken at an alarming rate. Many of them were never even completed.

Take the Oscar Niemeyer International Cultural Centre, located on the estuary of Aviles, in Asturias.

Construction began in 2011 but stopped nine months later after €44 million had already been flushed away.

The Galician City of Culture shared a similar fate. Ambitiously designed by American Peter Eisenman, the six-building project wasted €500 million – five times its estimated cost – before the city ran out of money, with two buildings yet to be built.

“It is a cemetery for money,” complains Pedro Armas, a spokesman for the opposition socialist party in the neighbouring city of La Coruna.

Even more alarming, US architect Wilfried Wang estimates that once finished, the total project will cost €1.2 billion. It is currently on hold.

Between 1999 and 2009, over 5,000 kms of highways were built across the country in the largest road construction project Europe has ever seen.

Some toll roads were introduced that not only failed to make logical sense, but have made almost no money.

Even worse, Spain’s high-speed AVE trains cost almost €6 billion to build yet they only transport about 1% as many passengers a year as the nation’s commuter trains.

One AVE line between Toledo and Cuenca saw just 16 people a day using it and was shut earlier this year.

But whether or not this new infrastructure was needed seemed to be beside the point.

Many regional airports went up close to major city airports.

These included Lleida airport, just two hours from Barcelona, and the Ciudad Real airport, only two hours south of Madrid.

Unsurprisingly, despite costing billions to build neither yields any profit. In fact they hardly have any flights. 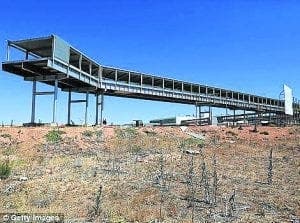 What is more, only 11 of Spain’s 48 regional airports actually produce a positive return.

“The problem is that such projects are generally conceived at a time when everything seems bound to succeed – even sometimes badly conceived projects – and there were no doubt some planning problems,” explains Salvador Alemany, chairman of Abertis, an infrastructure company based in Barcelona.

Another key issue is that most Spaniards were completely oblivious to the problem.

Indeed, the lack of transparency here has been a key factor in Spain’s economic crisis, as noted by David Cabo, representative of Civio, a foundation that lobbies for freedom of information.

“It’s terrible because you have many opaque layers of government and each of those control public money,” he says.

But as the recession worsens, these public works projects are becoming exposed for what they really are: fiscal black holes that guzzle money without producing much in return.

The unfortunate result is a massive €140 billion debt.

According to Juan Jose Toribio, an economist with Spain’s IESE business school, the solution to Spain’s white elephant problem may be to target the country’s sacred cows first – namely, its 17 semi-autonomous districts.

“Regional governments enjoy spending and inaugurating public works but they don’t run the political risk or cost of raising taxes. Someone should be held responsible for this and perhaps we should return to a much more centralised system,” he explains.

Whether or not that is the solution, one thing is certain: if Spain hopes to recover from the recession, it needs to address the white elephants in the room.