WHEN anyone mentions bullfighting to Anglo-Saxons, most seem to lose rationality, all sense of proportion, all sense of irony even.

I mean, how else do you explain the fat British tourist outside Flaherty’s Irish pub in Sevilla, who told me he liked it when the matador was gored, with a greasy half-eaten beef burger in his hand?

And it’s not just red-faced expats who fail to see the irony.

One Radio 4 journalist told me he had a passing interest in the subject because ‘nothing cheers me up in the morning like reading that a matador has been gored to death’.

Well, let me tell you, I am a matador and this sort of attitude greatly upsets me.

Why is there so much anger at the Spanish ‘fiesta nacional’ when us Anglo-Saxons have long liked a bit of violence – from Shakespeare to Hollywood movies?

We love watching violent films and we don’t mind cattle being killed for our stomachs.

We kill almost four million cows a year in the UK; a number that is almost ten times as large in the US.

And this is despite the growing obesity crisis and medical advice now insisting that red meat is nutritionally negative in value.

And then, of course, is the fact that the 1.5 billion global herd of cattle – which weighs more than the global human population – produces almost a fifth of all climate change gases.

The answer is that very British sense of fair play. The theory goes that a bullfight is not a fair fight. It is unsporting. It is not cricket.

Well, indeed it’s not. Nor does it pretend to be. Allow me to explain.

There are a whole host of misconceptions about bullfighting, and the biggest one of all is the name.

The bullfight is not a fight at all and the word in English actually derives from our own spectacle, illegal since 1835, of ‘baiting’ bulls with dogs.

What goes on in Spain is called la corrida de toros, ‘the running of the bulls’, and the name comes from what happens in the spectacle: a man makes a bull run past him using the large cape, capote or smaller and more famous red one, the muleta, before killing it.

He is the matador, which means ‘killer’,  and the men within the ring with him are called toreros, which means those who torear, the verb we mistranslate as to fight the bulls, but is actually to wrangle or play – in the sense of angling – with the bulls.

There is no winning or losing for bull or man in a corrida, this is not a sport and points are not awarded. There is simply nothing to be fair about.

Ultimately there is a script – think of it as a play or a ballet – and it must be followed, no matter what. If the matador is injured, another takes his place.

Part of that script also involves the picador mounted on an armoured horse with a lance, and the banderilleros with their barb-pointed sticks.

These individuals often lead to the claim that the matador could not face the bull one-on-one.

The answer is simple: he could. Any matador can face and kill a bull within a matter of minutes of entering the ring.

However, it would not be done bravely, or cleanly, or elegantly or, and this is the most important thing, with emocion.

As with any theatrical spectacle, the audience at a corrida wishes to be moved, not just impressed, and certainly not to have some sort of bloodlust sated.

There are two things the aficionado hopes for in a good corrida: In the bull, he wants to see the personification of wild, ferocious nature: the bull must be powerful and charge readily and continuously.

In the man, he wants to see the embodiment of the civilised virtues: courage, dexterity, stamina and elegance.

People want to see him go through a book of dance-like manoeuvres – derechazos, manoletinas, molinetes, and trincherazos, to name a few – and they want him to do them with grace.

In order to be able to ‘dance’ with the bull like this, it must be reduced from its initial fearsome proportions. This is done using a lance and an armoured horse. This sounds brutal because it is. If this is a theatrical spectacle, it is one with a ritual sacrifice at its heart.

The picador uses a lance and the weight of his horse to tire and damage the bull, highlighting the bull’s ferocity and fortitude, while also bringing its head down and reducing the range of movement of its horns so the matador can get closer.

The bull leaves this encounter diminished, and then chases after the banderilleros with their barbed sticks, all of which annoys him further.

Those who are against bullfighting like to focus on these parts of the corrida: the bull is ‘stabbed with spears‘, ‘bleeds half to death’ etc.

The first part of this claim is true, the second part false. From a veterinary perspective, a bull has over 60 pints of blood and can lose 15 of them without adverse affects. The spectacle may be bloody, but it isn’t even close to 15 pints of blood.

Which explains why, of the 533 famous professional toreros who have been killed by bulls since 1700 – and an unknown but certainly greater number of amateur toreros as well – so many were killed at the end of the fight, after the lance and banderillas. 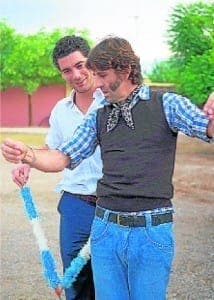 Nowadays, courtesy of modern surgical techniques, deaths are much rarer. However, the gruesome injuries are not, hence my own teacher, Juan Jose Padilla is now working as a matador with just one eye. The risks are very, very real.

It is this ‘reality’ that aficionados claim as the fight’s greatest asset. Everything happens out in the open, in sight.

There have long been those who say that this claim isn’t true. The League Against Cruel Sports and People for the Ethical Treatment of Animals (PETA) list all sorts of nefarious practices, most of which are simply untrue.

For example, rubbing Vaseline into the bull’s eyes before the corrida would be suicide – its ability to distinguish the cape from the man and chase only the cloth is all that keeps him uninjured.

Then there are the accusations of horn shaving: the idea being that removing an inch from the tip of the horn, and then sharpening it again, somehow makes the bull less accurate and the torero safer.

This definitely used to go on, although it has always been illegal, but now the law is strictly enforced. What is more, how much difference it makes is hard to fathom.

Bulls charge at you, so the horn will get you, and whether it does an inch sooner or an inch later makes no difference I can think of.

This, the great Manolete found out in 1947 when a bull with shaved horns killed him, sending Spain into mourning for a national hero fallen.

Which brings me to the last bit of propaganda I read all too often: that bullfighting is in terminal decline. It is simply not true and in 2007 there were 2,644 official bullfights in Spain – more than ever before.

This number has since fallen off, but in a way which mirrors, not exceeds, the decrease in expendable income in the country. For comparison, West End theatre in London has suffered a similar drop in attendance figures.

Similarly, there is an often quoted Gallup poll on this that says 72% of Spaniards have ‘no interest in’ – note no interest, not ‘are against’. This poll is from 2006. What is not mentioned is that that poll-figure decreased to 68% in 2008, which is the same figure as 2002, which is also the same as in 1992. Decline? What decline?

The most recent poll of all was conducted by Metroscopia for El Pais. It said that after the ban on bullfighting was voted for by the regional parliament of Catalonia in 2010 – which was purely cosmetic as only 1% of Spain’s corridas were held there –  57% of people across Spain said they are against the ban, even though 60% said they didn’t ‘like’ bullfighting. Meanwhile, 37% said they were active aficionados.

So, it looks like bullfighting is here to stay whether we like it or not. So get off your high horses and look at the hypocrisy of opposing it… and perhaps get out there to watch.

‘The bulls feel no pain’

Fighting bulls are raised free range to over three times the age of a meat cow, and then killed within 25 minutes in a ring while in full fighting mode, giving it all the adrenaline and attendant hormones the body produces to suppress pain and maintain fury. The most important of these are the internally generated opioids or endorphins. They are the reason, for example, that soldiers often report being shot in combat as a painless experience, at least at the time of injury.

Fiske-Harrison’s book Into The Arena: The World Of The Spanish Bullfight is available on Amazon.

Bullfighting to return to Spain’s Andalucia from June 21, with 50% of spectators allowed 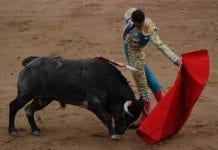