THE Olive Press celebrates its sixth birthday this month, and there six very good reasons to be happy about it.

Editorial, distribution, website, readership, advertisers and staff; the six key pillars that contribute to our success.

Since launching in November 2006 we have gone from being a small, inland paper to distributing in every town on the Costa del Sol and in all eight – yes eight – provinces of Andalucia.

The growth has been staggering going from just 3,000 copies to 33,000 copies printed per issue, not to mention up to 80,000 issues downloaded each issue online.

Indeed we have seen an incredible 60% growth annually for the last THREE years… three of the hardest in Spanish history.

Is it any wonder the paper is now the first media outlet the leading blue-chip companies – such as Morrisons, Ikea and Bupa – turn to when they plan their annual campaigns? 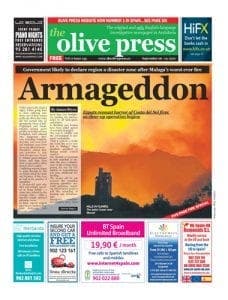 Without question Andalucia’s favourite newspaper for readers, we continue to find exclusives from around the region, as well as exposes on scam after scam.

Demanding a rough 50/50 split between editorial and advertising.

All our journalists are fully-qualified and NCTJ-trained, and capable of investigating and exposing wrong-doing wherever it may lie.

It is one of the fundamental cornerstones of a free and vibrant press… and we vow to continue upholding it!

But we realise that any successful paper needs a balance. It is why we also offer you a range of stories from celebrity trivia to sporting news, as well as bigger, more in-depth features on the best that Andalucia has to offer.

Our comprehensive All About Andalucia supplements have proven extremely popular (your third most popular sections, according to our research) and are used widely by our readers.

The boss of the Rolex shop in Gibraltar, for example, keeps all the pullouts in his car, for when he and his wife go off for weekends travelling around the region.

All our pullouts are now available to download for free on www.allaboutandalucia.com and this, along with a property site, dining site and environmental site are the reasons why our main website, www.theolivepress.es, is NOW Spain’s top English news website.

On top of this, we are the only paper championing green issues and we are the first paper that gets called when the British national press or BBC wants a comment on Andalucia.

Even better, we don’t charge €2.20 a copy like the national newspapers… 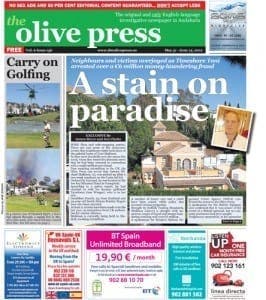 The Olive Press remains resolutely free and will stay that way.

Above all, we know we cannot become complacent. The market in Spain is tougher than ever before and the competition is cutthroat.

Advertisers have tighter and tighter budgets and we continue to strive to give them the very best value for their marketing spend.

To take the words of the UK’s top travel book The Rough Guide, the Olive Press is ‘southern Spain’s best English newspaper’.

Best, yes indeed. But we also know we can get better!

We have continued to reinvest our money into printing new papers and currently print 33,000 each issue, with around 65% going on the Costa del Sol. People used to claim they liked the paper when they could find it, but now our market research shows that 75% find it easy to track down.

It is no surprise that our website is now linked to nearly 100 international media outlets and has an Alexa ranking putting us at 85,000 in the world, compared, for example, to 363,000 of rival Euro Weekly News. On top of this we have FIVE other websites, including Green Guide Spain, All About Andalucia Property and Dining Secrets of Andalucia, all of which have grown year on year.

The Olive Press distributes from Huelva all the way to Almeria and it is now available in over 1,000 distribution spots along the Costa del Sol alone, with dozens in Benalmadena and Fuengirola and around 10,000 papers alone going into ‘Greater Marbella’. Look out for our bright red stands, and remember if you live inland, we have not neglected our former inland heartland, and continue to distribute in hundreds of small towns.

Voted by the Rough Guide as southern Spain’s ‘best paper’, we keep a balance of around 50 to 55% editorial and a story count always exceeding 100. And let’s not forget it was the Olive Press that the new Gibraltar leader Fabian Picardo first gave an interview to on getting into power, and the ONLY paper in Spain to talk to Michelle Obama (right) on her visit here two years ago. We have also interviewed Jamie Oliver, Chris Stewart and even David Cameron.

Our readers are an international bunch, who claim to speak Spanish and are generally discerning, better-established expatriate readers who travel regularly and eat out three times a week. Of our 250,000 regular readers, around 15% are Scandinavian, 10% are Spanish and on our website we count a large percentage of Irish and American visitors. Many read us these days via our Olive Press app, which is of course updated each issue.

All the blue-chip companies put the Olive Press at the top of each of their campaigns. These include supermarkets Morrisons, Iceland and Lidl, insurance companies including Linea Directa, Ibex and Liberty, shops including Leroy Merlin and Ikea and banks, including Sabadell and Lloyds. We support the paper by a regular partnership deal with Talk Radio Europe to both promote the paper and our stories.

“Congratulations! The quality of the title
is not just in the look of the paper, but the articles and objective editorial.
It is balanced and original and always a fantastic read.
Above all, it has been a useful tool for me as an advertiser
and it’s great that the paper is owner-managed,
so I know andtrust who I am dealing with.”
Sarah Hawes, director,
Cambridge 800, Mijas

“Congratulations on your sixth birthday!
I’m happy to have a newspaper around
that attempts to get beneath the skin of this multi-faceted corner of Europe –
and one which has a real interest in environmental issues.
I always look forward to the next issue of the OP!”
Guy Hunter Watts, author of
a dozen books on Spain, Ronda

“Many expats tell me the Olive Press is their favourite newspaper,
and with the growth in content and increased circulation
it’s not hard to see why.
Congratulations to the
Olive Press on your sixth birthday –
keep up the good work.”
Richard Alexander,
financial advisor, Marbella

“There is no doubt
that the superior support of the Olive Press helped make
our recent Homes, Gardens and Outdoor Living Show
a huge success.
The paper is extremely popular up and down the coast
and is an excellent read.”
Gina Marks, GM Events, Benahavis