A BRITISH expat has put his century-long life down to  the Spanish sunshine and a few tots of brandy per day.

Harry Allen, who reached 100 this week – was delighted to receive a card from Buckingham Palace wishing him a happy birthday.

“He was absolutely thrilled to bits,” said son-in-law Rodney Harnett who looks after Harry with his wife Gloria, Harry’s daughter, at their home in Riviera del Sol, Mijas.

Harry was born on November 18 1912 and was one of seven brothers born in St Austell in Cornwall.

“He does the crossword every day and is a keen follower of football. He enjoys very much Spanish brandy and drinks a few tots a day, and has benefitted from the lovely weather here in Mijas Costa.

“He is marvellous,” added Rodney, pictured below with Harry and Gloria. “He is well known in the locality and much loved.”

Buckingham Palace had managed to get the card to Harry’s Spanish address by contacting his daughter-in-law in the UK, and the card arrived promptly two days before the big day. 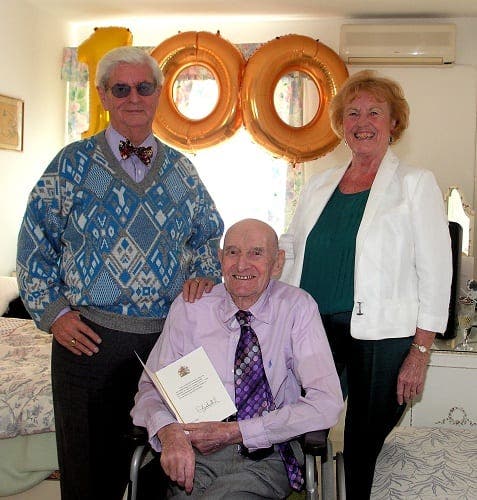