THEY say imitation is the sincerest form of flattery, and so here at the Olive Press we would like to thank the Euro Weekly News (EWN) for the compliment.

For over the last fortnight, at least ten news stories – almost identical to ours – have appeared on the EWN’s website within 36 hours of us posting them on ours.

In fact, we are being followed so closely, the EWN are often even choosing the same photos to illustrate the pieces – and sometimes even making the same mistakes as us!

Of course, as many of you will know, news cannot be copyrighted and once a piece of news is ‘out there’, anyone is free to publish it…or at least, a version of it.

Actual wording, on the other hand, is protected by copyright – which is why we were surprised to see several pieces appearing on the EWN’s site with almost exactly the same wording as ours.

On November 15, for example, we wrote and published the article ‘Hundreds collect free food in Sabinillas’ after one of our sales team went past the hand-outs on her way to the office and took a photo.

Lo and behold, on November 16, a story entitled ‘Free food parcels handed out in Sabinillas’ appeared on the EWN website.

While we cannot include a link to it because the article has since been removed, the screen grab we took of it (below) should illustrate the article’s similarity to ours.

So similar in fact was it, that the last par read exactly the same as ours and included our DELIBERATE typo in the last paragraph: 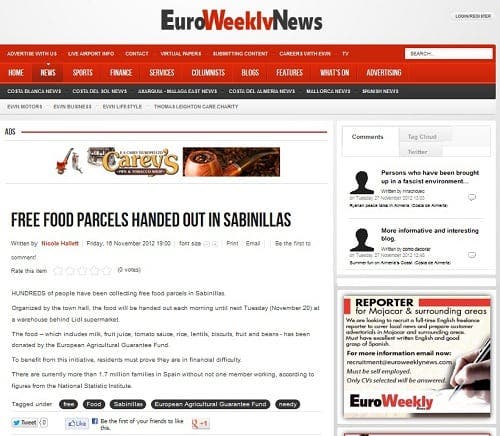 ‘There are currently more than 1.7 million families in Spain without not one member working, according to figures from the National Statistic Institute,’ both articles read.

For more examples, see the links at the bottom of this article.

It wouldn’t be so bad, except that the Olive Press pays its fully-qualified and trained journalists to find original and interesting content.

At the Olive Press we go out of our way to find original stories and avoid using regurgitated ones that have appeared in our two main rivals, Sur in English and EWN.

This because we pride ourselves on providing you with fresh, original content that you will enjoy, and benefit from reading.

We would sincerely like to thank the EWN for reinforcing the message that the Olive Press is the ‘best newspaper in Southern Spain’…. not our words, but those of the UK’s Rough Guide group.

Examples of our exact wording appearing on the EWN site from the last few weeks (click and see for yourselves!):

Olive Press, 26 November (AM): Nerja’s answer to Sex and the City

DUQUESA DENTAL: Giving you a reason to smile more!