AN expat left disabled following a botched knee operation has said his life will never be the same again after accusing medical staff of a ‘catalogue of errors’.

Ian Middleton, 50, originally from London, was seriously injured after being involved in a head-on collision in May 2009.

The former musician, who was on his way to a gig in Manilva at the time, was then left to wait 45 minutes in the rain after paramedics told him there was no room in the ambulance.

“My right knee smashed into the steering column, I hit my head on the windscreen and I was knocked unconscious,” Middleton told the Olive Press.

“I tried to get out and when I took a step forward with my left leg, my right leg just flipped up and kicked me in the face.

“That’s when I realised I had no control in my knee.”

Middleton, who lives in Estepona, then had his knee put back together ‘like a jigsaw puzzle’ by Spanish surgeons who cut into his knee tendon to try and remove the fragmented bones.

But after months of agonising pain the bone in his knee began to poke through the skin, leaving a gaping hole. 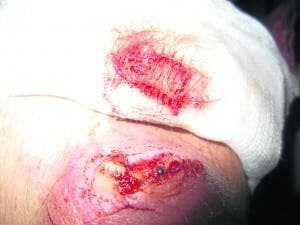 Middleton was forced to spend more than six months soaking the wound in Manuka honey while waiting for an operation and was advised by a private knee specialist that he needed a tendon graft.

Despite doctors at the Costa del Sol hospital telling him they would only operate to smooth down the bone, Middleton was ordered to casualty by a doctor on his return to the UK, after being told ‘I wouldn’t have sent a dog home with a leg like that’.

The Costa del Sol Hospital was unavailable for comment.