AN IU party boss has spoken of his ‘shame’ after a report into the €647 million ERE scandal was spiked by the Junta.

Ignacio Garcia’s report, which took five months to compile, had firmly allotted the blame at the door of PSOE bosses Jose Antonio Vieira and Antonio Fernandez… but also partially blamed the PP party.

The fraud – the biggest public money scam in Spanish history – saw a regional development fund used to pay early retirement payments to 70 individuals, often for companies they had never even worked for.

However both PP and PSOE parties refused to accept the 200-page report, which included information from politicians and business leaders.

The PSOE party rejected 30 conclusions in the document and blamed the fiasco entirely on former employment boss, Francisco Javier Guerrero – who was working under Vieira and Fernandez.

Garcia described the Junta’s refusal to approve the report as ‘tremendously disappointing’.

“We started out in the right direction but in the end we were frustrated by manoeuvring and strategies which led us nowhere” he said.

A judicial enquiry is also underway to decide who is criminally responsible for the fraud. 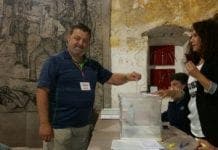