A FORMER Moulin Rouge dancer is on the run in Spain after being found guilty of a €35,000 benefit fraud.

Briton Dawn Orton, 47, appeared to be struggling financially as she claimed incapacity benefit for a shoulder injury and lone widow payments following the death of her husband.

But the former showgirl was actually living a life of luxury, enjoying 41 holidays in 13 years while failing to tell officials that she was in a long-term relationship with a company director.

The mother-of-two was found guilty of defrauding taxpayers out of €35,000 but had eloped with her new boyfriend and was sentenced in her absence to 12 months in prison.

The sentence was based on the assumption that the incapacity benefit was a genuine claim, despite the judge presiding over the case at Hull Crown Court expressing his ‘suspicion’.

Orton had claimed on the basis of a shoulder injury, despite continuing to play badminton and enjoy skiing holidays.

Jeremy Richardson QC described Orton as ‘audacious’ after revealing she had written to the court asking for the trial to be switched to Gibraltar to make it easier for her while in Spain. 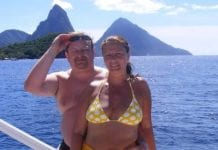