AS the altitude begins to drop sharply on the journey to the Costa del Sol from northern Europe the first images that lucky window-seat passengers have in sharp focus are of the Valle del Guadalhorce.

This 804 sq km region of Malaga province is a huge swathe of fertile agricultural land, dissected by the Rio Grande river and with craggy mountains to both the east and west.

Criss-crossed with many other streams, as well as modern and ancient acequias, or man-made water channels, it is an area abundant with agriculture, indeed, one of the richest in Spain.

Because much of the upper reaches are uninhabited, abundant and rare wildlife thrives in the forests and the hills.

The region’s principal towns lie in a line under the Sierra de Mijas, a long ridge of hills that are coming ever-closer to becominga Natural park.

These municipalities include Alhaurin de la Torre, Alhaurin el Grande, and Coin, the region’s ‘capital’ and all are very popular with the British expat community living happily alongside their Spanish (and German) neighbours.

This popularity is reflected in the availability of all-day bacon and egg breakfasts amid traditional tapas bars and well-priced menus del dia, which are snapped up by all nationalities. 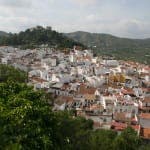 In Alhaurin el Grande there is an English family that runs a near-equivalent to an English Post Office complete with all the British (and German) newspapers. Close by is an English butcher, a pet grooming business Posh Pets, run by former Crufts winners and a clothes shop the Wardrobe, where you can get a pedicure.

“More and more foreigners seem to be moving here,” explains John Gow, 42, from Northumberland, who runs the popular Papeleria Cristina in the heart of town. “We can gauge it by our PO boxes. We got another 50 at the end of last year and they are already all taken. A lot seem to be Scandinavians.”

Move inland a few kilometres up the main A357 past Cartama or up the charming A404, which eventually winds up to El Burgo and you will eventually arrive at the sometimes snowy peaks of the Sierra de las Nieves, a natural park and Unesco biosphere reserve.

Up here in the hills, suddenly the cosmopolitan life on the coast seems very far away. Mercifully the area has no large scale ‘plastic tent’ farming as traditional methods still apply giving the landscape a tranquil feeling.

On the western side and passing three ‘Franco villages’ there is a Malaga/Ronda railway line which takes in Pizarra and Alora on its way towards Antequera and the world famous climbing area of the El Chorro Gorge.

Halfway up the A357 there is a junction where the visitor has some choices to make: Turn left and the road takes you to Casarabonela, famous for its water, traditional white washed village image, heritage status Rondellas festival and the largest collection of cactus plants in Spain, and then onto Alozaina and over the mountain passes to Ronda.

Alternatively go straight on and the road climbs up towards the historic spa town of Carratraca and then the ancient settlement of Ardales which lies just below the lakes and rivers thatfeed the Guadalhorce river itself.

Another side turning takes you past Pizarra along the valley towards Alora, past the imposing castle on top of a hill, and on to the El Chorro gorge by a different route. 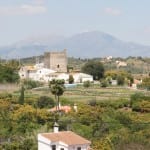 The scenery is spectacular in all directions. As each road winds its way up the valley, the views get better and better.

But head into any of these towns, even the more sprawling settlements of Alhaurin el Grande and Coin, and you will find classic narrow streets with white-washed houses and a great choice of lovely churches to visit.

Up in the hills take any of the dirt tracks for a stroll and you will quickly come across herds of goats and sheep and often mules ploughing between the olive trees.

While first colonised by the Romans, it was the Moors who have had the major influence on the area. Everywhere there is evidence of their work which tamed the tumbling streams into irrigation systems and brought fertility to the whole of the valley.

But while the region has been termed one of the bread-baskets of Andalucia since Roman times, the locals have long struggled with the fluctuating rainfall which can still bring devastating floods to the whole of the valley or leave the land parched for months on end.

Huge citrus groves dominate much of the landscape the crops of which are transported to the local fruit wholesalers and cooperatives where it is packed and sold on.

There are also swathes of olive and almond plantations, and in many of the towns and villages there are thriving olive oil factories.

The first drift of northern Europeans into the valley came in the 1960s and 1970s, but during the late 1990s and early this century there was a massive drift to buy the many fincas and cortijos scattered around. 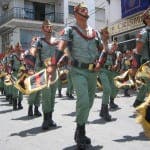 Now many enterprising ex-pats make a living alongside their Spanish neighbours, whether it is a safari ride in a Land Rover or a quad bike trail.
For walkers there are experienced guides who will take small parties into the hills along centuries old mule tracks, or there are horses to hire by the hour or by the day.

For those who seek other forms of leisure there are inland golf courses, the best of these being Lauro golf, one of Andalucia’s oldest and a gem with lovely views and wide open (and thankfully flat) fairways.

Many organisations, such as the Royal British Legion and the U3A art group hold events in the valley and there is always something going on.

Yes, perhaps it is time you left the beach on the Costa del Sol and came and explored this large and varied region where 10 per cent of Malaga province has its home. I am sure you won’t be disappointed.