TONI Muldoon’s gang have been found guilty for their involvement in a €6.6 million escort and debt recovery scam.

Three others, Mark Bell, 41, Colin Samuels, 61 and Geraldine French, 60, were each convicted of two counts of conspiracy to defraud.

At least 14,000 people were conned by Muldoon’s schemes.

The Costa del Sol-based gang conned people into signing up to act as ‘non-sexual’ companions with the promise of earning up to €700 a day.

Clients paid an upfront fee of over €400 but never received any work.

Muldoon, a former timeshare boss, has also admitted masterminding another scam in which the group cold-called people and promised to eliminate their debt.

Judge Rupert Overbury told the group that jail sentences were inevitable before remanding them in custody.

Rogers, who cried as he was led from the dock, is said to have received over €880,000 into his account. 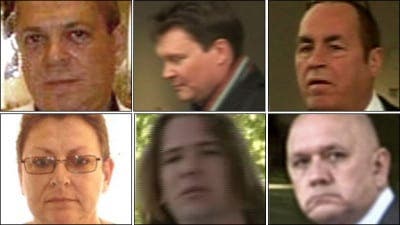 It has also emerged that Taylor, who denied any knowledge of Muldoon’s illegal activity, had documents on his computer regarding his boss which were named ‘Born to be a Costa Conman’.

The case, investigated by Suffolk Trading Standards over three years, turned into the biggest of its kind ever taken on by a local authority.

Television producers, Tiger Aspect Productions, are now set to make a documentary on the mega-scam while all six involved are due to be sentenced in July.