PRIME Minister Mariano Rajoy cannot rule the country unless he explains his involvement in the so-called ‘Barcenas Files’ corruption case.

The leader of the opposition Alfredo Rubalcaba insists his presidency is ‘impossible’ without a frank and honest discussion about the affair, that has scandalised Spain.

He will this week call politicians to a vote of no confidence after paperwork apparently showed that the PP leader illegally took up to 350,000 euros in cash bungs.

After the PP party stone walled country-wide calls for him to give an explanation, PSOE leader Rubalcaba has spent much of the week attempting to unite the opposition parties into supporting a motion of censure in Parliament.

In an interview with El Pais, he said: “I believe what has been said constitutes a lie and a president cannot lie to the Spanish population.

“Until he answers these questions he cannot govern.”

“I want to be able to explain to my wife and my nephews what it is I do for a living,” he had earlier insisted.

While a broad range of parties support the move, they are concerned of the image it sends to the world regarding stability.

The Basque Nationalist Party, the Catalan CiU nationalist bloc, the United Left (IU), and Union, Progress and Democracy (UPyD) have all agreed that the move will not seek to oust Rajoy but serve as a parliamentary tool to register their discontent.

According to a survey published in the conservative El Mundo newspaper, 83% of Spaniards believe the allegations and think Rajoy should answer them. 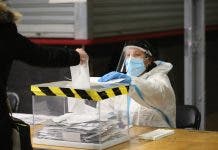