GAY bars in Andalucia are boycotting vodka, after draconian anti-gay laws were introduced in Russia.

A series of Spanish bars along the coast are refusing to stock any brands coming from the country after President Putin banned homosexuality.

“We are not ordering any vodka from Russia,” insisted a spokesman for Gay Club Puerto Banus.

“We totally support the gay community”

Gay clubs and bars around the world are now supporting the movement, launched by American Dan Savage.

The law banning homosexuality has been enforced by the Kremlin, and has stirred up Russian vigilantes – who are taking the law into their own hands.

Shocking videos have been appearing on Youtube showing thugs attacking victims in the street, and even urinating on them.

The No Russian Vodka movement is ensuring that homophobia cannot be hidden behind the iron curtain – the global community is doing everything it can to highlight the problems in Russia. 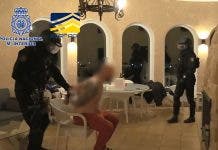