THE chaos at the border hit new heights on the evening of November 18. Normally the Guardia Civil check vehicles but for the first time they decided to search all the bags of pedestrains leaving Gibraltar.

The ensuing queues stretched back almost as far as the airstrip. At one point pedestrians where having to queue for up to three hours to get through the border. ‘What an absolute DISGRACE last night’ one of those caught in the queue wrote on social media the next day -The Spanish government should be ashamed of themselves for putting human beings through this – up to 3 hours for some people on foot to exit’

Chris Bouliache contacted the Olive Press to say Thanks for the ‘Border Watch’. We need all the help we can get, seeing as the UK Govt. doesn’t seem to be that bothered despite all the questions and comments in Parliament. The Royal Navy and our own Police Authorities seem to be allowed only to give warnings to Spanish incursions, which are consistently ignored ..The last ones for 22 hours!!) If that’s not taking the pxxx I don’t know what is!! (Pardon my language)

Meanwhile, another reader (who wished to remain annonymous coommented ‘Just out of interest I was stuck for over two hours on Tuesday crossing by car from Gib to Spain. I finallyreached the front line and was about to move forward,when to my left the Gibraltar Police removed the barrier tape allowing two cars to jump the queue. Niether car had the Royal Standard therefore it was not the Queen. Upon asking the Gibraltar Police I was informed they had a pass so that they did not have to join the queue. So I assume officials do not queue like us peasants. It’s a case of I’m all right Jack – tough on everyone else!’

On a lighter note, Tommy ‘Quest’ Duffy had a novel idea to deal with the queues ‘I think a border queue party is in order! Anyone with a big soundsytem in their car wan to provide the music, everyone bring a bottle or whatever and we party infront of the border! Turn a negative into a positive whilst rebelling against the disruption. The media attention would be amazing as well. Who’s up for it?’

BREAKING: Confusion over Gibraltar frontier continues after opening is delayed 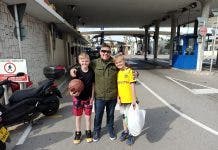