THE COUNTDOWN to the ‘Big Switch Off’ has just begun.

The clock is now ticking on free-to-air British television being received in southern Spain after a much-publicised satellite finally started moving into place.

Rumours emerged a couple of days ago that it was heading west towards its destination, and have since been confirmed by those in the know.

At its current velocity the satellite would arrive at its destination in 33 days. But, it is expected to speed up.

The satellite has been a hot topic of conversation across Andalucia since news of its launch broke last year.

It has been the most commented post on the Olive Press website after it emerged that the BBC, and possibly ITV, will transmit via the new satellite.

Expats have taken to the Olive Press site in their droves searching for a solution to their forthcoming woe.

Most are keen to establish how they can carry on watching the at-risk channels following the satellite switch off, which could happen at any time from once it is in place.

“The countdown has definitely begun,” explained Mike Crompton of IPTV company Mediastreamz. “It is going to be just a matter of weeks now before most people’s TV screens start looking pretty sad.

“I hope they have some solution in place.”

The satellite is being introduced to substitute the old Astra 2D satellite that rapid declined in performance after a few years in use.

The BBC has already made an announcement that it will be using the more powerful UK spot beams which means British viewers in Spain are likely to lose the signal.

Thousands of expats in Andalucia are converned about the moves, after Channel 5 and various ITV channels vanished from their screens in December 2012. 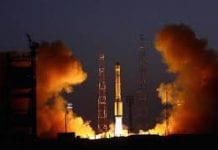