A LANGUAGE school has attempted to persuade Spanish Prime Minister Mariano Rajoy to reverse a decision to scrap language scholarships – by offering him free english lessons in the UK.

Madrid-based Speak & Go Idiomas sent the Prime Minister a letter inviting him to take a free language course in the UK. They claimed it would enable him to realise the benefits of learning a language in the country in which it is spoken.

But the Prime Minister politely turned down the invitation, stating that while he appreciated the importance of learning a foreign language, austerity cuts to education spending would remain in place.

Rajoy said the government was pushing towards bilingual education in public schools in order to prepare students for the future.

But while students used to get grants to go overseas to learn foreign languages, funding cuts have led to them having to attend summer camps here in Spain instead. 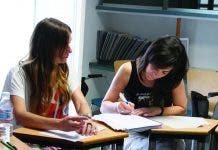