SPANISH inheritance tax (IHT) is once again a matter of controversy. According to El Pais newspaper, the number of people who have given up their inheritance has gone up by 21% since last year.

And there is only one reason cited for this increase: the inability of many potential inheritors to pay a tax bill unless they first inherit and sell the asset in question, generally a property, in a very challenging market.

Unfortunately for many, Spanish IHT and ways to avoid it has been exploited relentlessly by unscrupulous operators to sell new schemes promising that this tax would no longer be a problem.

The Spanish Equity Release comes to mind just now but also, more recently, the bogus scheme where one transfers their property into a UK limited company so that, on death, the Spanish property is inherited in the UK – in a roundabout way – via the inheritance of the shares of the company.

The Spanish Tax Office closed the Equity Release tax avoidance scheme last year, when it was tagged as tax fraud. And more recently, it has also dealt with the scheme that offers UK companies the chance to circumvent Spanish IHT (Tax Binding Consultation 07383-13) pretty much in the same way, by declaring the following:

“…In relation to the tax scheme consisting in legally transferring a property to a UK company, with the sole purpose of avoiding IHT in Spain through relocation of the taxation of the shares of the said company to the UK, there cannot be a favourable response by this Tax Department in relation to the lawfulness of the scheme. Only via the appropriate inspection procedures will the Tax Office be able to establish whether it conforms to the law or, as the case may be, infringe it in which case, the Tax Office will be able to regularize the anomaly by initiating the required procedures to combat tax fraud.”

These conclusions are hardly consistent with a public promotion of a service whereby if you place your property in a UK company, IHT can be legally avoided.

In fact, the official opinion on the matter embeds a message of warning: if you use this scheme to mitigate IHT, you will have clearly crossed the line separating lawful tax avoidance and illegal tax evasion. 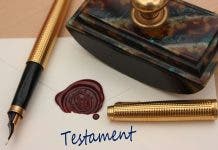 SWAN’S CORNER: Do I really need to make a Spanish will?