TWO of the coast’s best known expats have locked horns in a vicious spat over the sale of controversial international driving ‘licences’.

It comes after Spain’s leading expat motoring writer Brian Deller found his advice website had been hacked and redirected to that of David ‘the Dogman’ Klein’s Costa del Sol Action Group.

Conveniently, it meant that his critical section on the costs and necessity of the ‘licence’ offered by Klein was also erased.

But now Deller, 76, has sought legal advice and got his website back after a three-week struggle, involving numerous calls and emails to Klein.

He also contacted his employers at Talk Radio Europe, where Klein presents a weekly pet show.

The DJ has sold hundreds of permits – via a classified advert with his mobile phone number – for over a decade.

When contacted by a prospective client on behalf of the Olive Press, this week, Klein offered a ‘10-year licence’ for €300, but admitted it was ‘risky’.

“I can get you an international licence that will last for 10 years, but it is a risk (to use it in Spain).”

He continued: “Should you be stopped, some police might say everything is OK, while others will fine you.”

This is because the document is illegal to use as your sole driving licence in Spain, and Deller points out they are actually ‘useless’ for expats here.

But this has not stopped Klein charging up to €450 a time, while similar permits are easily obtainable from Spain’s Traffic department for less than €20, or the AA in the UK for just €12.

Klein confirmed this week that he had been arrested over the allegations of selling illegal licences in 2007, but that he was eventually found not guilty at Malaga High court.

“I was found not guilty and as a result I feel happy to continue selling the permits,” Klein told the Olive Press.

“I clearly state that this is not a licence. This is an international driving permit which requires people to use their own licence with it,” he added.

However in the adverts, which appear in publications including The News, the permits are offered clearly as ‘licences’ (see left), a discrepancy he has failed to clear up. 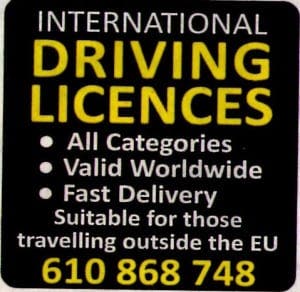 Either way, Klein – who lives with his wife in Nueva Andalucia – is adamant they are legal.

“Why shouldn’t I sell them? If they want to go to Trafico or the AA they can. I wouldn’t bother doing it unless I’m earning €100,” he said last night.

Expat Deller – himself a former motoring correspondent on TRE and the author of big-selling book Motoring in Spain – begs to differ.

He insists that that there is ‘absolutely no need for the licences’, a fact that he had pointed out on his website.

He also angrily denounced that his website, www.Spainvia.com, was ‘hacked’ into so visitors were redirected to the Costa del Sol Action Group website.

However, Klein – who has newspaper columns in both the Euro Weekly News and the News Monthly Review – denied any knowledge of the hacking and insisted that Deller was ‘wrong’.

“Brian Deller can’t blame me for something wrong with his website, it’s Google’s problem,” he told the Olive Press. “Google is responsible for misdirecting.”

How exactly though, he was unable to explain clearly.

It claims to have over 1,000 members and to have won back four million pounds for clients to date.

Deller had been approached by Klein to sell his driving permits after his book – which sells in WHSmith, Waterstones and on Amazon – was first published in 2004.

“I did admittedly sell one to a South African man for €450, before I realised they were totally unofficial,” said Deller, who lives in Sotogrande, having moved from South Africa over three decades ago.

“It had been made in Taiwan, was very expensive and I quickly discovered that the official sources are much cheaper and actually legally recognised.

“I’m very angry about what’s happened to my site and we have consulted lawyers over it,” he added.

He said: “No one can sell an international driving licence. At most, you can advise someone on how to go about applying for one.

“What Klein seems to be doing is purport to be the purveyor of these international driving licences, which is wrong.

“If he is acting merely as an intermediary, and charges whatever the parties convene, that is different.”

Have you bought a licence from Klein? Anybody with information should email newsdesk@theolivepress.es

I was taken for a ride

ONE angry punter – who wished to remain anonymous – told the Olive Press they purchased an international driving permit from Klein for €450 in 2006, after moving to Spain from the Middle East and spotting an advert in Sur in English newspaper.

The licence is blue and passport-like, with the words ‘worldwide community of vehicle operators’ on the front.

The word ‘licence’ is spelt inconsistently throughout, with both the American ‘license’ and the English ‘licence’ in the same sentence in one instance.

“It was so badly done I was worried about driving past police,” said the client. “It looked pretty amateur and the picture on the card was also out of focus.”

International driving permits are only necessary for people travelling to a foreign country, not residents, and they are worthless without an original licence too.