Four drug rings were busted bringing hashish, ketamine and other drugs into Spain, to sell during the annual bull-running festival.

Raids across northern Spain saw 29 gang members arrested, as well as 9kg of ketamine, 9kg of hash and smaller amounts of speed, cocaine, marijuana and methamphetamines.

Guns, vehicles, several knives and €65,000 in cash were also seized.

“While each organisation operated independently, they were in contact with each other,” police said in a statement.

The ketamine – a veterinary anaesthetic – was smuggled from India by drug runners on flights that arrived in Madrid.

The highlight of the festival is an early morning bull run, when adreline-junkies run alongside six half-ton fighting bulls through the town to the bullring. 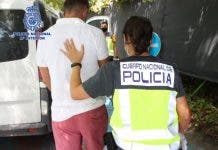