HE claimed to have invented a ground-breaking truffle inoculation method.

And during a memorable visit to the Dragons Den BBC TV show in 2006, Dr Paul Thomas even snared €100,000 of investment from Yo! Sushi founder Simon Woodroffe.

While it was later put on hold, he went on to sell his exciting invention via his company Mychorizal Systems across the world.

Enter Wendy Smart, a horse-breeding life coach with direct marketing skills, among many other talents. The expat had arrived in Spain 15 years ago with high hopes of starting a truffle plantation to offer to investors.

After creating a slick website and an enticing business plan, she enlisted dozens of optimistic investors in the Ronda area with promises of high returns, under the name Europe Truffles. But nothing came to fruition. No estate was bought, nor a single tree planted.

So when she suddenly left Ronda for Valencia four years ago, claiming ‘better truffle growing conditions’, she left behind a trail of concerned expats, not to mention workers up-in-arms over alleged unpaid debts. At this point she enlisted Dr Thomas – and his new methods – who became another investor, unaware of the difficult situation he was getting himself into.

And now those anxious investors have teamed up with a series of  shareholders in Valencia who also claim that their investment is anything but safe.

Concerned about the state of her plantation, in Tirig, and the future of its oak trees, they cast doubts that they will ever see a return on their money.

And worse, despite receiving up to €1 million in investment, Smart – the majority shareholder – is refusing to pay some ex-employees.

Dr Thomas admitted that he had been contacted frequently by fellow investors, who were worried about the plantation.

The Sheffield-based scientist told the Olive Press: “I hear a lot of allegations about the plantation and Wendy, but I am always cautious. But if the plantation is neglected then the likelihood of achieving any crop is extremely low.

“We are still waiting for test results before making judgments, and I have also not visited the plantation since the very beginning, when it looked good but Wendy has asked me to come this year.”

Expat Roger Wallis, who originally worked with Smart over a decade ago in Ronda, claims that if he did actually visit, the scientist would no doubt be ‘horrified’.

“The plantation does not look healthy and apparently a third of the crop is dying,” he claimed.

The leader of a recently launched action group, Wallis invested almost €20,000 in 230 trees in an effort to help Smart, his then friend, in 2013.

He also persuaded friends to invest, before discovering to his ‘horror’ that she had already received ‘nearly a million pounds in investment’, much of it sent to an offshore company in the Seychelles.

“She owns over 65% of the shares in the company so therefore she is almost untouchable,” he told the Olive Press.

“I have tried to shake up the shareholders – especially Dr Thomas – because they all stand to lose a lot of money.”

For one person it is already too late. Former management consultant, Trevor Suter, who is still owed €70,687 (£56,000) for his work in promoting and overseeing the Europe Truffles project.

Now living in Cambodia, Suter worked for Smart for eight months between July 2008 and March 2009.

He insists he should have charged even more, but was placated with the false promise of becoming a shareholder.

In the end, the only money he received was for flights and some other minor expenses.

“I was appalled by how she was acting and I suggested they replace her with a new management team, but nobody listened and I ended up quitting,” he said.

“It’s caused me so much stress over the past five years.”

Meanwhile a sacked worker, Jose Alfonso Roda, told the Olive Press he too has never been paid for his services on the plantation.

The Spanish labourer, who was in charge of irrigation, is still owed around €10,000 for four months work.

Another disgruntled worker Harriet Risueno-Charlton, now living in London, stopped working for Smart as a translator when her wages dried up.

She told the Olive Press she spent much of her time appeasing land-owners, workers and a multitude of people who were also owed monies.

“She was always desperate for money which seemed bizarre for someone with apparently such a big business,” she said.

“More and more debts kept unfolding as I was doing her translation, until after a while she stopped returning my emails and calls, and wouldn’t pay me.”

The shareholders, including a previous business partner, expat Karen Williamson and Ian Hunt, a retired businessman, are also discussing how to solve fears over Smart.

Smart however denied the debts to Suter and Charlton, and claimed that she wouldn’t pay Roda as he couldn’t prove he had done his job properly.

She insisted that the plantation will begin producing truffles within a year, with investors then beginning to recoup their investments.

She also denied allegations of neglect; however she didn’t deny that at least some of the money had gone to the Seychelles.

Smart admitted: “People who have been disengaged have their axes to grind as normal.

“It’s not easy for an English woman who doesn’t speak Spanish, but I work 24/7, did all my homework and will defend my business.

“If I wanted to scam people and take lots of money, I wouldn’t do it by working myself into the ground on my plantation!” 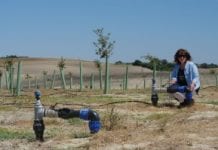 Angry expats hit out at truffle farmer over debts