Deferring your UK State Pension may seem like a crazy idea but there may be method in the madness, writes Richard Alexander

SO why would you want to defer your pension?

After all, with state retirement age on the rise, most of us have to wait long enough to receive it. But many people have good reasons for not drawing it the moment they become entitled to. It could be that they don’t need it at that stage, or they may be concerned about paying too much income tax on it.

Although State Pension is paid gross, without tax being deducted at source, it isn’t tax-free income. It’s added on to other earned income to determine your rate of tax. The income tax rules and rates differ between the UK and Spain but the principle remains the same: if you are already receiving earnings at a level that you pay tax on, then all of your State Pension will be taxable at your highest marginal rate of income tax.

At first glance, the option to defer pension could look attractive. So what is involved?

First, I should point out that the rules are changing for people who reach state retirement age on or after April 6, 2016. But for those retired already, or reaching retirement age before then, a deferred State Pension will grow by 1% for every five weeks that you defer. This is equivalent to a 10.4% annual increase and you can then elect to start it at any time. Sounds good so far!

If you have deferred for at least 12 months, you have the further option of taking the deferred pension as a lump sum, when interest at a rate of 2% over bank base rate will be added. That sounds good too! But beware – the full amount is assessable for income tax. The lump sum itself could even push a basic rate taxpayer into a higher tax bracket that year.

If your spouse has a deferred pension and dies before drawing it, you should benefit. However, if there is no surviving spouse or civil partner, then only three months of the deferred pension is available to the estate!

For people reaching retirement age on or after April 6, 2016, the rules are less generous. The rate of accrual for deferred pensions is reducing from 10.4% to 5.8% every year and, furthermore, the option to take the lump sum is being removed altogether. For people already in deferment in 2016, the new rules will not apply.

As you can see, what at first glance looks like a daft idea could actually have merit in certain circumstances. But don’t be swayed by the benefits without thinking about your tax position and, perhaps, your state of health too.

As always, there is nothing simple about any kind of pension so, if in doubt, you should seek independent advice. 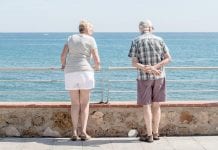