COMPETITION was sizzling between teams of Catalan daredevils, during a competition to build the highest human tower in an astonishing display of strength and engineering.

The group event known as castelling – or human tower building – dates back to the 18th century.

Thousands of ‘builders’ and spectators were drawn to this weekend’s competition – held every two years – in the port city of Tarragona.

Known as castellers – the adrenaline junkies work together to build human towers with between six and 10 tiers.

Several towers collapsed during the nail-biting competition, although nobody was seriously hurt.

The highest castell in history was made up of 10 tiers, with three team members in each tier.

Unesco even added castells to its list of the Masterpieces of the Oral and Intangible Heritage of Humanity in 2010, to celebrate the art form.

The stadium this weekend was lined with banners in support of the Catalan independence referendum, as Catalan leaders forge ahead with the vote.

This is despite Spain’s Constitutional Court provisionally blocking their plan for the vote to separate Catalunya from the rest of Spain. 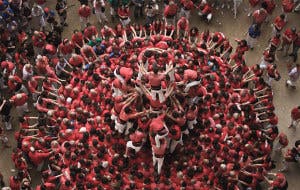 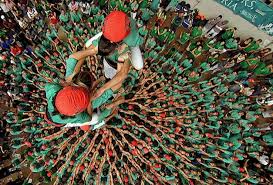 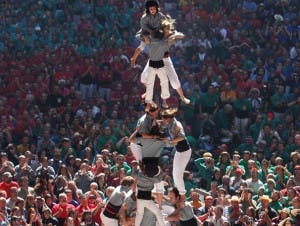